Middag hos oss, ("Dinner at our place") by Ulrika Jisland and Anna Jonassen (published by Bonnier Fakta) looks immediately very Swedish. The cover has gorgeous photos of pretty food, pretty Swedes sitting on a dock holding live crabs (the authors), and boats. There's a strong summer vibe throughout. This is the first book I have by this particular duo, but they have written a few others as well. They're not chefs - one of them is a teacher, and the other a journalist. However, they love food, and they love having dinner parties, and that's what this book is all about. It has tons of recipes for easy and quick meals that are "good enough for company". I'm particularly in love with the picnic chapter, and am planning to try most of those recipes (as soon as we get our backyard in order!). How about mini omelettes with bacon and chèvre cheese, or perhaps rhubarb soufflé? Sounds right up my alley!

Medelhavsmat för svenska kastruller ("Mediterranean food for Swedish pots"), by Cecilika Wikbladh (published by Kakao förlag) seems rather generic at first glance - just another Mediterranean cookbook? There are tons of them. Swedish people love Mediterranean cooking, and it's really shown in the cookbook publishing for the last couple of years. However, this one is subtly different. The recipes are much more adapted to what you can actually find in Swedish stores, and it's also clear that the author has included recipes from more places than just Italy and Greece which are the most common "mediterranean" cuisines. You'll also get ideas from France, Portugal, the Middle East and Northern Africa, and I'm pretty excited about recipes like Oven-baked Ratatouille, Chicken & Orange Pasta salad, and a fabulous Galette with Mascarpone Cream. 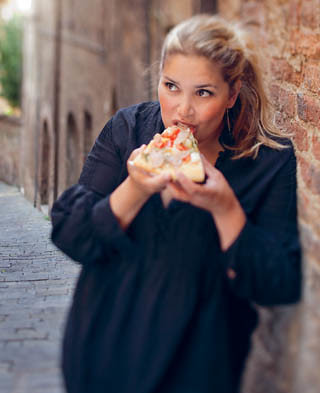 One More Slice is the latest book by one of the most hyped Swedish cookbook authors at the moment: Leila Lindholm. (Published by Walter & Books.) She's often compared to Nigella Lawson, and is portrayed in a similar way in her tv show - very sensual, lots of footage of Leila sticking her finger in her mouth and saying "yuuuuuum" and so on. And, as with Nigella, I don't really care for the tv shows, at all. When it comes to the books, Leila and Nigella are nothing alike. Nigella is a writer, so her books are always beautifully written. Leila is a chef. This book is a follow-up to "Piece of Cake" which is available in English as well. As with that one, the idea is to have a basic recipe for, say, cheesecake, and then providing lots of variations. Some might feel tricked by this, since you're not really getting a lot of recipes, but I'm charmed by her sheer inventiveness. I like that there's over 20 versions of waffles and pancakes (even though some require a Belgian waffle iron which I don't have), and that there's nine flavor ideas for "tortano" (filled Italian bread).

Leila is really popular in Sweden for her "American-style" , but I imagine those that would buy her book in English are more interested in Swedish-style baking. And then, sadly, this is not the book for you. (Not that it's available in English yet, but I imagine it will be.) However, I'm sure this will be a smash-hit with Swedish bakers, and I'm sure she'll provide inspiration for very many.
Posted by Anne at 12:07

The 10 Best Cookbooks for Your Kitchen
http://favorite-bookonline.blogspot.com/