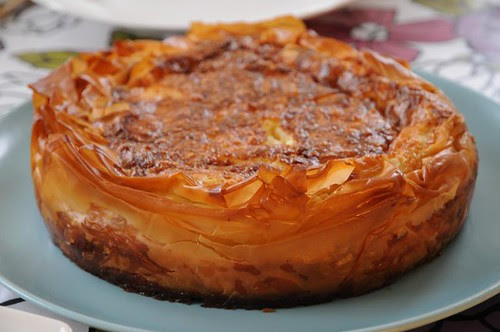 Here's a new take on a sharp cheese pie - something I've often made with Swedish Västerbotten cheese, but as that was unavailable when I shopped, I chose a sharp cheese called "Prästost" instead. A sharp cheddar would be nice as well! This pie is really rich, and is great to serve with lighter dishes, but to cut down at least a little bit on the fat, I used phyllo dough rather than a normal pie crust. (I'm really no fan of pie crust, so this suits me much better.) As a bonus, it's really pretty!

Serves 10 as part of a buffet

You need a 24-cm springform pan

Work quickly, or the phyllo dough will dry out. Start by brushing your pan with oil. Place layers of phyllo, overlapping, and brush some oil between some of the layers. (It's not all that important, so don't worry.) When all the layers are in the pan, add the cheese.

Whisk the eggs, cream and cayenne pepper, and pour this over the cheese. Scrunch together the overlapping phyllo dough, and fold inwards to make a nice edge for the pie. Brush the edge with olive oil.

Bake at 200°C for about 30 minutes. The filling should be mostly set (but might still be a little wobbly) when you take it out. Leave to cool for at least 15 minutes before cutting.

Recipe in Swedish:
Prästostpaj med filodeg
Posted by Anne at 10:02

I just bought some springform pans. i am new to cooking but I heard they are very useful.

That looks so delicious and I love how golden it is.