It's that time of year again - Sweden celebrates national cinnamon bun day today, on October 4th. It might be a peculiar sort of holiday, but the cinnamon bun really is quite beloved. I'm away on a trip, so I won't be making any myself this year, but you certainly can - here's my best recipe! (I've published it before, but hey, I'm sure many of you haven't seen it.)

This recipe differs slightly from others I have used. First and foremost, it uses more yeast than others, and it has a pre-rise at a batter-like stage before it becomes a dough. It might sound fiddly, but it helped me get really light and fluffy buns, and I'd definitely do it again. The total rising time is no more than two hours anyway, so it's well worth it. The recipe calles for "raw sugar" which is here interpreted as demerara or possibly muscovado sugar. This gives the dough a slightly darker color, and a less intensely sweet taste - I like it! 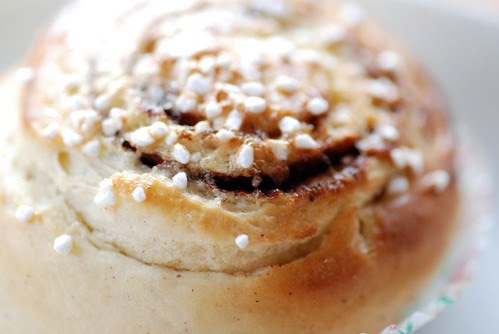 You can use finely chopped or flaked almonds for the topping as well as the pearl sugar. The buns are delicious no matter what!

What makes these different from American cinnamon buns then? Well, while there are many recipes out there, I'll point out a few things. First - cardamom in the dough. Very important. Second, these are baked in a very hot oven for just a few minutes. This makes them light and fluffy, with a nice brown surface yet not dry or overbaked. Third, they're always baked in individual paper cups. (Bun cups - they're like slightly lower muffin cups.) Fourth, no glaze!

A few notes on the recipe. You might need a little more flour than stated. It's hard to give an exact amount, as it really depends on a lot of things, but the dough should be soft and never dry, but it shouldn't stick to your hands, either. Remember, you're going to roll this out, and you don't want it to stick to the rolling pin or whatever surface you're using. (You can use extra flour when rolling it out - but not a lot, or your buns will be tough.)

I don't have exact amounts for the filling - I just sprinkle on sugar and cinnamon until I have a fairly even amount on the whole dough. Don't worry, I'm sure you'll get it right, too. 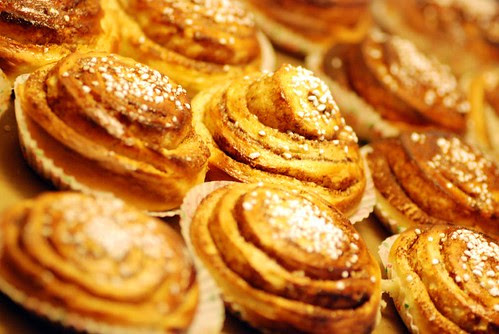 Crumble the yeast into a bowl. Add some of the tepid milk, and stir until the yeast is dissolved. Add the rest of the milk, half of the flour and both of the eggs. Leave to proof, covered, for one hour.

Add the rest of the flour, the sugar, salt, cardamom and butter. Work into a smooth and silky dough. Here's when you might need a bit more flour. Transfer the dough to a clean bowl, cover and leave to proof for 30 minutes.

Divide the dough into two. Roll out each part to a large rectangle. Spread with butter, and sprinkle with sugar and cinnamon. Roll each rectangle into a tight roll, starting at the long edge, and cut each roll into about 20 pieces. Place each piece in a paper cup on a baking sheet (covered with parchment paper so you won't end up with a mess), cover and leave to proof for 30 minutes.

Beat the egg with a pinch of salt and 1/2 tsp of water, and brush this carefully on the buns. Finish by a light sprinkling of pearl sugar. 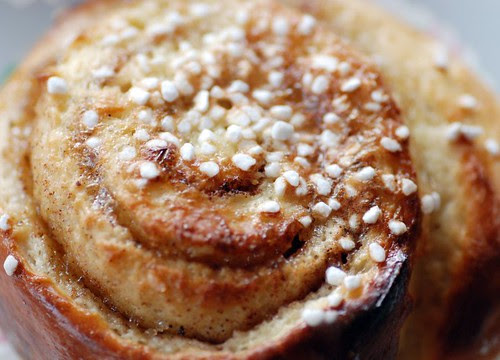 Recipe in Swedish:
Bästa kanelbullarna
Posted by Anne at 11:26

Hi Anne,
I just popped in from Coco Cooks. I'm so glad you updated your link for National Cinnamon Bun Day. I've had your link on my celebration calendar since last year. Although, I don't bake often enough, I did pass it along with much success. Thanks so much for sharing. I'm going to link your recipe to my latest post right now...

You know fall is here with National Cinnamon Bun Day!I love the Swedish and their buns.

A few posts back I asked if you knew of anywhere in London where I could get smorgasbord. I have since found The Scandinavian Kitchen and the Nordic Bakery thro the internet.
I went to the Nordic bakery yesterday and had a very good cinnamon bun and a coffee so Iam delighted to have this recipe to cook them for myself.Hope it will work OK if I halve the quantity.

Hej Anne!
We will be making some buns this week as part of my Patisserie course. This recipe definitely comes in handy. By the way, it might just be by chance but it's spot on that we will be making the buns on Sweden's bun day week! By the way, thanks for the wonderful book!

I introduced the Kanelbullar day to my dutch colleages- with home made cinammon buns. It was a big success, and everyone just love these buns...too bad they are not easy to find in Amsterdam!

Charly, I'm pretty sure you can find cinnamon buns in Amsterdam. If not, and you really want one, you can find a nice Swedish shop in Utrecht that have kanelbullar.

Yummy! What a tasty day, don't think applies in the UK though. But, its a great excuse to eat lots of cinnamon buns

I made cinnamon buns yesterday and they are really good. It worked OK halving the quantity. I have frozen a few in their pre cooked state. So when I need them I will get them out of the freezer to thaw and prove before baking.

Joe at Sweden From the Cheap Seats linked to this recipe and I'm so glad he did--these are delicious, fast for a 3-rise bun, and just the right amount of sweet and spice. I halved it and used dry yeast without any problems.

I'll add two things --1) love a country that celebrates baked goods and 2) your cats are gorgeous!

Can I use all purpose flour instead of wheat flour?

Anonymous - sure, as far as I know, same thing, different name depending on where you live. Regular, white flour...

I would like to make this two days early. Could you tell me which step should I stop at to freeze them in the freezer and take them out to bake two days after? Thank you!

Anonymous - sorry, never tried that myself. I bake them, then freeze, and just re-heat.

Anonymous - how very strange, it must be some different kind of yeast. What I use is fresh yeast, sometimes called compressed yeast. It's normally used 50 g per 500 ml of fluid (2 cups), so this recipe has a little more than I'm used to, but definitely not by much. A normal bread dough uses perhaps 50 g of yeast and yields two loaves so I have no idea what the salesperson you encountered was on about :) If you're using dry yeast though.. sorry, can't help with the measurements, but it should be a little more than you'd normally use for a yeasted dough.

You might already tell that this is my first time baking...:) I purchased active yeast and on the package, it says: 3 1/4 oz. packet equals the activity of one 2 oz. yeast cake. I have 3 packets. Should I use all three?

Thank you so much for your help!

Oh goodness, I wish I could be more helpful! :) If they're anything like our dry yeast.. one packet equals one packet - 50 g - of fresh yeast. So.. I'd probably use two. But if they differ.. ah, it's so hard when you have different ingredients! :) All I can say is I really, really hope they will work out for you :)

Hi anonymous, I have used dried yeast for this recipe. I used one heaped teaspoon with half the quantity of other ingredients. I left some of the buns to prove for 30 min before cooking and I froze the rest. This afternoon I got them out of the freezer and put them in a warm place to thaw and prove. When they looked larger in size I cooked them and they were as good as the original ones.

Can you tell me about how many cups of wheat flour you used?

And a big thank you to Tessa for your answers!! :)

Thank you!!! so I guess I will be using 3 packs of active yeast.

I'm leaving it to proof for an hour. The dough is sticky-is this normal?

I just finished baking my buns! Unfortunately, something went wrong and the dough didn't rise. When I took them out of the oven, the buns were a little hard, but surprisingly tasty! My friends and I ate the first batch in 10 minutes! Thank you for all your help! Thanl you Tessa!

It should be slightly tacky at least, but not extremely soft or sticky. I imagine you're done by now - hope they turned out nicely!

Dear Ann:
i saw ur page about Cinammon buns and i made it at home and even though i did not have yeast at home i add a bit of lemon . after i baked them in oven they taste nice but they r not soft ( they became really hard ) do u know why is that and apart from yeast if there is other reason which makes them hard?
also can you plz write me ur email
thanks
Mona

I knew I loved Sweden for a reason! yeh! Cinnamon Roll Day!