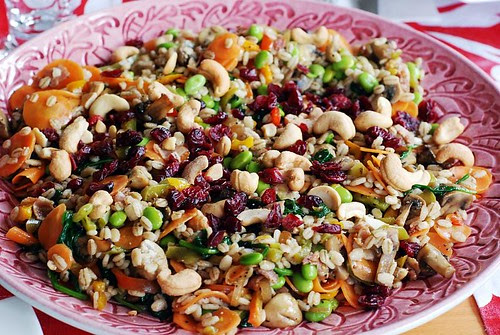 A few days ago, I had friends coming to a somewhat unexpected lunch. Well, not *that* unexpected, but I wasn't well prepared and didn't feel like shopping. This is what I managed to scramble up - and it was a really big hit! You can definitely play around with the basic concept. I used a special sort of grain called "food barley" which I think is just wholegrain barley that's been pre-cooked. If you can't find that, use regular barley (but it will take quite a while to cook!), quinoa, bulgur wheat, cous-cous or even rice.

Serve with a simple yogurt sauce - thick creamy yogurt (greek style), mixed with a few drops of water, chili paste (I like sambal oelek), minced garlic and a spoonful of dijon mustard. Delicious!

Boil the food barley according to the package instructions - meanwhile, prepare all the other things. Fry the bacon until crispy, and let the onion and carrots cook along for the last few minutes. Remove to a bowl, and fry the mushrooms in what remains of the bacon fat. Boil the edamame (for frozen, I just basically cover them with water and bring to the boil) and squeeze out all the little beans from their casings.

Mix barley, carrots, mushrooms, bacon, onions and beans on a large platter, and top with the cranberries and cashews.

This sounds delicious!! It also looks very much like trail mix :)

I love anything with beans at this time of year - it just feels like the right kind of food!

The colours are great and the combination of textures and taste is exactly what I would mixed given the opportunity.

Thanks for an inspiring autumn salad!