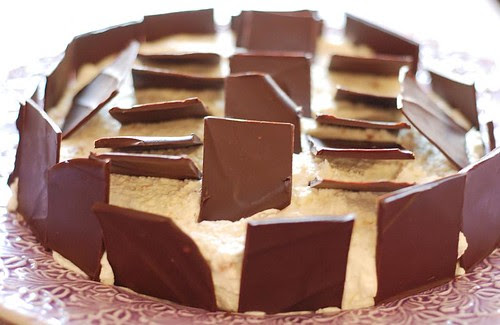 I can hardly believe it, but it's been FOUR years. Four fun-filled years since I started this blog - isn't it incredible? Let's hear it for four more years - at least!

As is my tradition, I'm serving up a somewhat classic Swedish cake for you. Previous years, I've made a Princess Cake, a Budapest Rolled Cake, and then Oscar II:s cake, and today, let me tell you about the Swedish version of a black forest cake. In most other countries, this cake has chocolate and cherries. In Sweden, it's meringue, hazelnuts and chocolate, with whipped cream. No chocolate sponge cake, no cherries. It's what I grew up with, and I absolutely love it - you can find it in most Swedish bakeries, and there's even a frozen version at the grocery store which isn't half bad. But making your own is easy!

I added a bit of Punsch, sweet Swedish liqueur that tastes of Arrak, to the cream. It's not traditional, but it sure is tasty. You can add something else - say, Amaretto or Frangelico for example - or just a little vanilla. I also happened to have a bit of praline paste left over from a Daring Baker's Challenge, and I added some of that to the filling as well. Delicious!

Start by grinding the hazelnuts - either in a nut grinder, or in a food processor until they're very fine. Mix with the powdered sugar. Beat the egg whites into a stiff meringue, and fold in the nut mixture. Spread (or pipe) the batter into three evenly sized circles on parchment paper. Bake at 175°C for 10-12 minutes, or until they look dry. Remove from the oven and leave to cool completely, before carefully removing the paper. (If it's stuck, try brushing the back of it with a little water.)

Beat the cream and add Punsch according to taste. Add praline paste if you'd like. Spread the cream in between the layers, and on top of the cake. If you want to pipe it, you need more - say, 5-600 ml.

Melt the chocolate for the decorations, either in a bain-marie or in the microwave. Add a drop of neutral oil, like corn or canola, if you want to: it'll make it a bit shinier. Spread evenly on a parchment paper, then place it on top of a baking sheet or large cutting board and place in the freezer for five minutes. Remove, and by now the chocolate should have started to set but still be a little soft. Score a square pattern in the chocolate with a sharp knife, then slide it back into the freezer to set completely. Snap the squares apart, and decorate as prettily as you can.

Serve fairly soon, this isn't something that holds up very well.

Recipe in Swedish:
Schwarzwaldtårta med punschgrädde
Posted by Anne at 17:27

Wow 4 year that is indeed a real achievment.
Congragumations and Happy birthday to you blog

Congratulations on your 4th year of blogging! You have amazing recipes and beautiful pictures, thanks for sharing with everyone!

Happy blog birthday Anne's Food! You're doing an incredible job and I look forward to another 4 years and many years to come.

I had the pleasure to try this lovely cake and it was delicious!

Yuor recipes make my saliva drip!!! :)) On the floor! nice blog! I am glad i have come across it since i am a big fan of sweden. ;Stockholm - the most beautifulcity in Europe, hands down! [http://www.odyssei.com/travel-gallery/119328.html] :)

Auguri from Italy!! Happy birthday to your blog :) it's really great, fun, clear and complete, and deserves all of its success.
Valeria

Happy birthday to the blog!

Congratulations!!! I am inspired by your blog very much, some of your recipes are our family's favorites!

Happy, happy blog birthday Anne! Time flies when you're having fun, not so?? It's been a pleasure getting to know you over these years :) And what a wonderful cake!

Happy blog birthday and continue with those delicious recipes. !!!!

Happy bloganniversary. Wow 4 years! The cake sounds delicious and similar to one my mum makes at christmas, only she uses chestnuts in place of the hazelnuts.

Congratulations, Anne! All the best for the cooking competition.

CS is in Stockholm this weekend. I need to tell him to bring me back some Punsch. I love Black Forest.
And happy Blogoversary! Looking forward to more.

Congratulations on your 4 yr milestone! :)