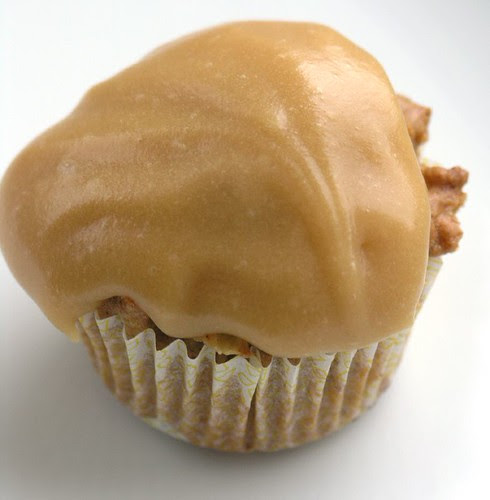 Lo and behold, an apple cupcake with salted caramel frosting! I missed Sugar High Friday, where the theme was cupcakes (do check out the round-ups over at Food Beam!), but I actually made these some time ago. I won't provide a recipe, since it's not something I'd make again, but they were still well received at a work function. I was actually aiming to make a WHOLE lot of cupcakes - a hundred or so - for my brother's birthday party, but after making these I decided it wasn't as much fun as I had expected. So, no huge cupcake bonanza for me!

I made a fairly basic cupcake with some diced apples and a little bit of cinnamon in the batter, and then used a recipe from Cupcake Bakeshop for salted caramel frosting. It was, however, a lot runnier than I expected, and tooth-achingly sweet. But delicious - I have some left in my freezer, and I think I'll use it to top an apple cake in the near future. These worked well as minis, since they were both rich and sweet. Those who wanted could take two, though!
Posted by Anne at 10:21

These look delicious. You can't go wrong with apples and cinnamon

Wouldn't mind having this count as my daily serving of fruit.

Wow I love the cupcake bakeshop! So much so that I had to immediately make apple cupcakes, fill them with the remaining baked apple then top them with vanilla cheesecake frosting - yummy!

These sound so amazing! I've never had salted caramel but I definitely might try these!