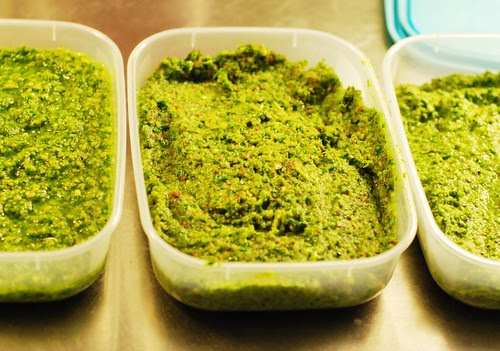 I've been spending some time today taking care of a huge crop of rocket (also known as arugula) which I've been growing. I guess I hadn't counted on all of it being done at the same time, and I really should have picked it at least one week ago. Oh well, better late than never. However, I had to think of something to do with it that could be frozen, and used over the next few months, as I wasn't up for just having a huge bowl of rocket for dinner every day for two weeks. So, I turned to pesto. So simple really, and you can put nearly anything in it. The base I used was garlic (one or two cloves), salt, black pepper or chili, a pinch of sugar (since my rocket was a little bit too old, that means it's also more bitter), a splash of olive oil, a good handful of nuts (I used almonds, hazelnuts and cashews), as much rocket as the food processor would hold, and more oil.

Basically, I started by blitzing the garlic, salt, pepper or chili, sugar, nuts and some of the oil, adding rocket, and finally more oil. You can definitely put in cheese, but I think I'd rather add that at the time of the meal instead. (Or to be totally honest, I just forgot.) I made three batches - one with hazelnut, one with almonds and chili, and one with cashews. All three turned out super! Now, I'm freezing them in shallow containers, but when they're frozen, I plan to chop them into more appropriately sized pieces (I think maybe four or six per container) and freeze them in plastic bags instead.
Posted by Anne at 14:56

You have been a busy girl, Anne! If you want to freeze small quantities, ice cube trays work well. The new silicon muffin trays could also be used. Enjoy your week!