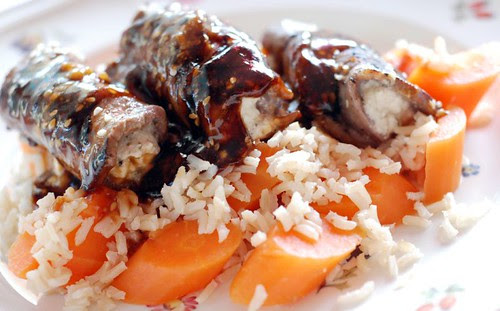 This might sound like a really, really weird recipe, but I assure you, it's tasty! I'm not so sure of what the cut of beef is called in English - it's called "lövbiff" here, which translates into "leaf-beef", since it's "thin as a leaf". It's basically a very thin slice of beef, that you can easily roll up. There must be something like it in your grocery store, yes? I don't generally use it much, since it goes so incredibly dry if you just fry it, but it's nice for rolling things inside of it. My mother-in-law makes awesome roulades with salami and cheese inside, in a red wine sauce. Very delicious!

Sprinkle the meat with salt and pepper. Place a spoonful of cheese near the end of each meat slice and roll them up. Use a toothpick to secure them.

Fry in a hot pan for about 2 minutes on each side. Sprinkle with the sesame seeds and add the teriyaki sauce. Serve right away, preferrably with rice and some boiled carrots or other veggies.

That looks divine. I love all sorts of roulades. This Asian place we go to wraps thebeef around straw mushrooms.

Oh, and I do believe that 'lövbiff' is minute steak in English. :)

Angelica- another alternative is Beef Ham. If wrapped round a sausage this would be beef olives in the UK.

I like those steaks wrapped around spring onions or thin asparagus spears as well. Nice to know there is some use for those dreadful minute steaks!

Looks so good! I've never really been able to make leaf beef but I'll try this. :)