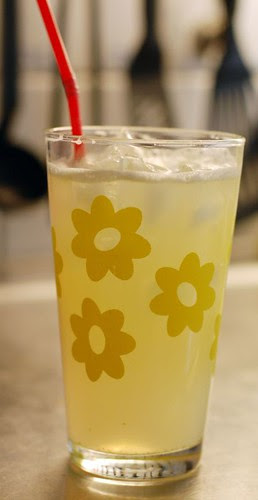 It's hot. Really, really hot. Ok, you guys who live in a tropic climate, stop smirking now. For Sweden, this is hot.

So, I made some limeade. I found a recipe here, which sounded to simple to be true. What you do is take a lime - a whole one, not peeled, not squeezed: a whole lime - and cut it up a little. Whizz it in a blender with some sugar and water. Squeeze through a colander, and add more water. Drink. That's it.

It's actually *really* tasty! It has a bitter note from the lime peel, which is quite refreshing on a hot day. It won't keep, because it gets more bitter as you let it stand, so drink it right away. I'm thinking this would also be really good with perhaps a few strawberries or raspberries thrown in, so I'm going to try that later on.

As for quantities, I used one large lime, 50 g of sugar, and 1 litre of water. (Half to blend, the half added later.) It was pretty strong, so I diluted it a little bit more with lots of ice cubes and cold water. Enjoy!
Posted by Anne at 19:03

am just drinking this at this very moment :-) Here in london we have good weather too, and I had 3 limes in my fridge so I just thought I'd try it. Delicious & refreshing, thanks!
Hope you're well otherwise.
Hugs,
Cassandra