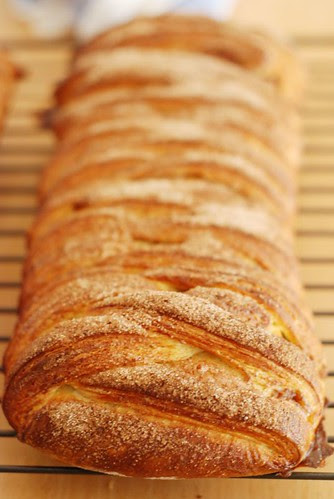 This month's challenge for the Daring Bakers, chosen by Kelly and Ben, is a Danish Braid. I've always found it amusing that wienerbrod, which is really common in pastries here, is called Danish in English. Danish? Huh? I've never thought of it as particularly Danish, but.. I suppose it might be. Or maybe it's about as Danish as French Toast is French? The Swedish name means "bread from Vienna", by the way. 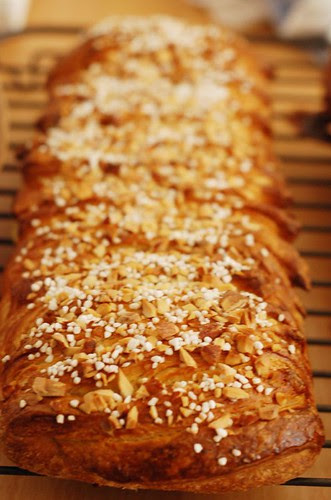 But what it is is basically a laminated yeasted dough. I've done that once before, for Pain au Chocolat. It was a real pain - that dough was much harder to work with, but it also yielded better results. That one was much more flaky, whereas this one was more like an ordinary yeasted dough. Not that I'm complaining - I don't like the flakiness at all, so this was more to my taste. And the Danish-lovers in my family loved it as well, so it might have been a pleasing compromise. 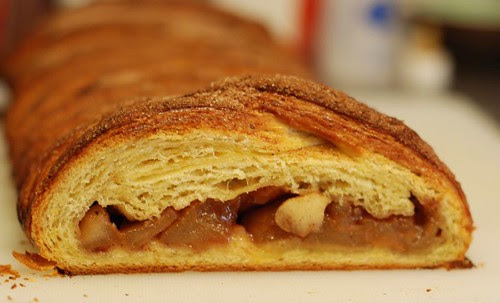 This was fun to bake! Basically, you make a yeasted dough without butter, but you don't let it rise just yet. (That's a major difference from the recipe I had tried before.) You then beat butter with flour, and spread that onto the dough. After that, you fold. And roll. And fold. And roll. It gets harder each time, but not hysterically so. It's do-able. After that, you roll it out one final time, fill it, braid it (really quite easy) and THEN you let it rise. 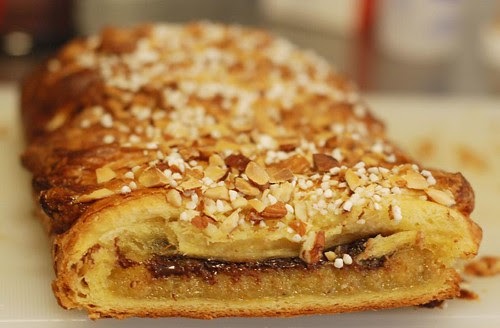 The filling recipe we got was for an apple filling. It was optional, but I liked the idea so I made it. I used three apples instead of four, and it was just the right amount for one braid. Per loved it, by the way, he's a huge fan of apple pastries. The other one turned out better in my opinion - I took about 200 g of almond paste, beat that with a little bit of unsalted butter and some white syrup to soften it, added the zest of one orange and about one teaspoon of crushed cardamom. I spread it onto the dough and topped it with chocolate chips. Yum! 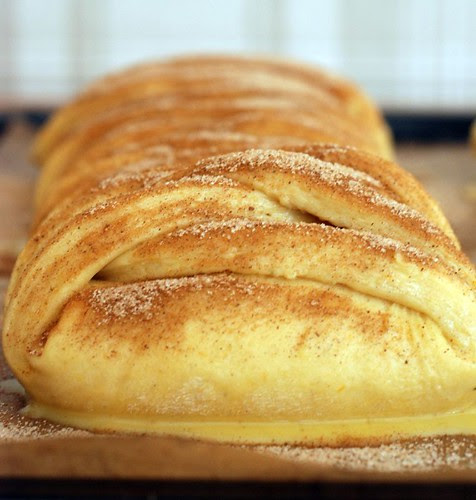 The recipe called for an eggwash before the rise, which I found a bit odd (or maybe I just read the recipe wrong), so I waited until the end of the rise to wash the braids and top them with cinnamon sugar (for the apple filling), and chopped almonds and pearl sugar (for the almond-cardamom-orange filling). 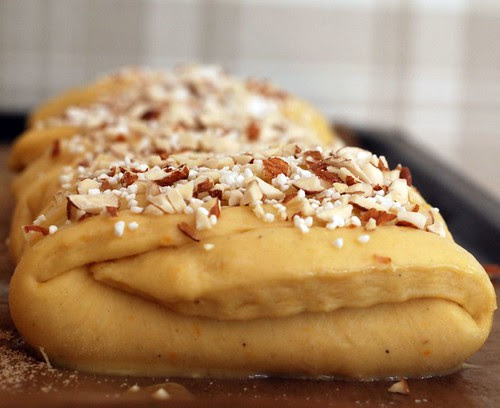 You can find the recipe, with photos, here.
Posted by Anne at 19:12

Beautiful braid Anne. And I don't know why we call them "Danish" either. It certainly puzzled my grandmother. :)

Beautiful! But as you say, far from from the real ones, however still good :-) Fredrik really liked your almond filling when we tried them at your place, while I prefered the apple one.

Nice - and nice to know the difference between these and the 'real' ones. I particularly like the different filling you used - if I make this again, I'll think of incorporating some almond paste somewhere. :)

Im glad you made them. Me I like the flakier pastry and will redo it one day. Seems all good pastry comes from Vienna:-).

Your orange chocolate one must have tasted amazing. I just stuck with the apple as it was my first DB challenge! I can't believe I managed it.

I thought mine was a little "bready" too. I'm glad I'm not the only one. It was fantastic though.

Your "Danishes" look really wonderful, but now I want to know what does a "real" Danish taste like?

The Baker & The Curry Maker said...

While I'm no fan at all of Danish - when it comes to bread:) - these look lovely indeed.

Danish is actually very common in Denmark, often with chocolate. However they're called "Wienerbrød" in Denmark too, while they apparently named "Kopenhagener Gebäck" in Vienna. Topsy turvy!

I think I was expecting flakiness and was surprised it wasn't there...

Oh, and I added more egg wash half-way through the baking because it didn't look like what I had added before was doing anything. Next time, I'll just wait until right before, like you did.

Your Braids look wonderful. I particuarly like the sound of the alomnd and chocolate one. So creative.

Molly - it's more flaky and buttery, with much more pronounced layers and more crispness. And virtually no flavor, it definitely doesn't have orange and cardamom like this one did.

Your braids are beautiful! Both fillings sound delicious!

You made such lovely danish braids! Wonderful photos :)

What beautiful braids! I love your ideas for your fillings!

Great job! Those pictures are very tasty. Thank you for baking with us :)

oh anne! abvsolutely magic! your braids are a real dream and the fillings are amazing!