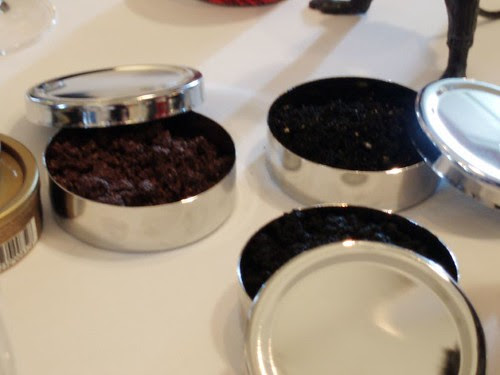 I was invited to lunch at Esperanto - brilliant star restaurant, excellent food - by Swedish Match, the largest producer of snus in Sweden. Snus is a very Swedish thing - not quite like chewing tobacco, but a popular alternative to smoking. (You can read all about it here.) It's apparently used by over 1 million Swedes, which should tell you something about how widespread it is. I've never tried it, but my dad was an avid "snusare" in his days and I remember it strongly from my childhood.

Snus can be flavored in many different ways, and the objective of the lunch was to point out some of these flavors and see how they would interact with nicely paired food. Interesting - even for those of us who preferred not to actually try the snus, but to just enjoy the food. (I did sniff the snus, and it did work very well with the food - chefs Sayan Isaksson and Daniel Höglander had definitely done a good job in matching the flavors!)

Before the first course, we were served "mock-snus" - the chefs had made up three concoctions that looked like snus, but weren't. One was made with dried olives, one with browned butter and one with madeleines colored with squid ink. Huh. This was quite strange, and not especially tasty - the butter one was particularly scary. (These are the tins in the first photo.) 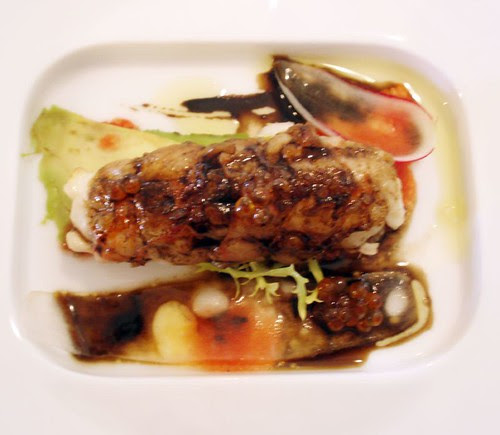 First course was a havskräfta - a Norwegian lobster/Dublin Bay Prawn/Langoustine, it has many names! - that was flavored with peach and licorice. Interesting flavor combinations, but the problem for me was actually the texture - it was a bit too soft for my liking. It was topped with a roe, and served on a slice of avocado. It was made to match with the flavors in Röda Lacket snus. 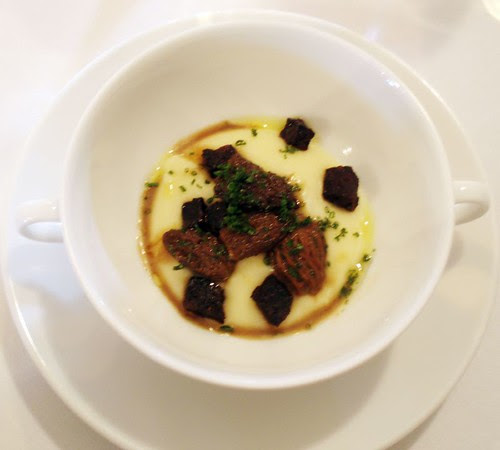 Main course was my favorite - a potato cream topped with fried morcilla sausage and black morels (morchella elata in Latin, or toppmurkla in Swedish.) Just beautiful - the flavors went so well together. This was supposedly reminiscent of Ettan snus. 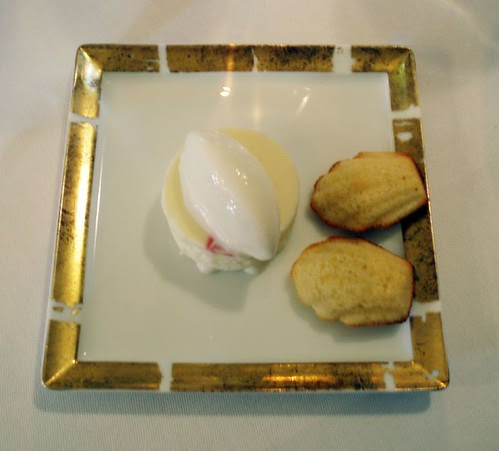 Then, for dessert, a divine rose-infused sorbet on top of a rose creme. It was served with tiny madeleines, that the chef had spritzed with rosewater before serving. Very tasty! This was matched with General snus.

The wine was brilliant too - Evolution, from Oregon, a mixture of Pinot Gris and Riesling. Unfortunately not available in stores here, but perhaps where you live - if so, do try it. 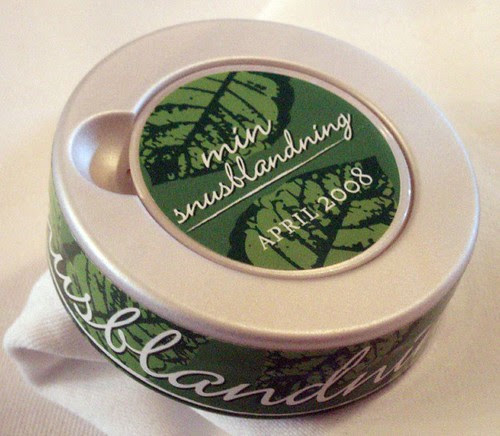 At the end, we had the opportunity to flavor a snus of our own. I made one with cognac and cloudberry for my friend at work, and she reported back that it was actually quite good! Maybe that's my alternative future, snus-flavorer...

..or I could always grow tobacco. We were each given a tobacco plant, and I plan to put it in my garden soon. Wish me luck.
Posted by Anne at 08:15

Um ok, I will say nothing as to the marketing tools they run after...

I come from Kendal, Cumbria (UK), where there has been a huge snuff industry for centuries and there still are a number of manufacturers.

I like it in tiny quantities, occasionally. An acquired taste. I'm not sure if I'd like food flavored with it, but I'd be prepared to try it.

denzylle,
Swedish snus is called one of a kind in Europe or the world. It is usually put under the upper lip. now they're mostly available in one portion baggies, as the picture shows used to be how people used them way back. There's also a reversal to snus that does not contain any tobacco but rather a flavoured mix of oh, mints and herbs (I have never tried it but from what I know they have become quite popular).

Hi there, Why would you promote this kind of product.

Great blog otherwise. From a swedish who lives in australia

Since over a million Swedes like their snuff, I thought it was quite interesting. Something that big is definitely a part of Swedish culture - like it or not. I'd never touch the stuff myself - I'm not into nicotine of any kind, and I think both snus and cigarettes smell horribly, but that's not what this post is about. I wouldn't write about, say, a new kind of snus on the market, but this was about something else. Personal choice, I suppose. So, I'm sorry if Swede in Australia disagrees with my choice to write about this.

Interesting post. Not sure snus is something I'd try though! The meal sounds interesting too and i must agree that the first course with the avocado just sounds texturally... wrong. Too squishy - eeek! Thanks for sharing your most interesting evening with us, and it's your blog: write about whatever you like ;-)

where can I buy your "min snus"? I usually buy my snus at http://www.northerner.com but they don't sell your snus :-(

Anonymous, you can't.. It was a custom blend that I made. Sorry!

Very interesing article. I have been using snus now for 6 months. I used snus to quit smoking, I had a 2 pack a day habit for the past 18 years. Snus made quiting smoking VERY easy.

Snus is not a habit someone should just pick up unless they were using a different tobacco product that was more harmful. Studies have shown that real Swedish snus is actually 98% safer than smoking.

So if you are addicted to nicotine, snus is a much safer choice. And I feel when the time comes I will have a much easier time weening myself off of snus than cigarettes.

Heh, actually Eric:) It's for most people much more difficult to stop using snus than smoking. However, your point on snus beein more harmless is accurate!

Sincerely // a swedish construction-worker who randomly found this post while googling for new interesting snus-brands:)