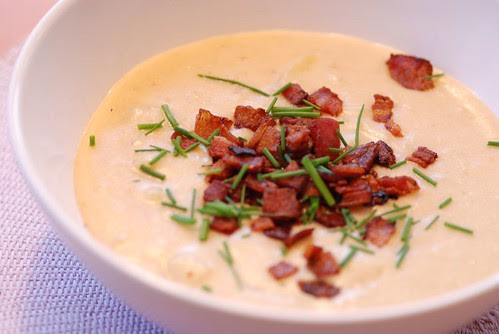 I've had this soup bookmarked on del.icio.us for absolutely ever, but I finally made it a few days ago. It's a very thick potato chowder, and it comes from 101cookbooks where you can read the recipe. I didn't change a thing, except using actual bacon instead of fake bacon, and I used Vasterbotten cheese instead of gruyère. Yummy, by the way. Oh, and I mixed some of my soup to make it thicker and smoother.

It wasn't a complete success - as the soup cooked, the milk seemed to separate and curdle slightly. Some of that went away after I mixed it, but it was still a little bit grainy. If I make this again, I'll probably use water the cook the potatoes and just use milk to thin the soup when it's done. And I know that probably takes away from the whole chowder thing, but if it makes it better, who cares?
Posted by Anne at 08:26

Hmmn...I think I'd have gone for double cream and thinned it with something else - stock or such.

But it looks delicious!

I do love a good chowder--I may file this recipe away and try it (with your recommended modifications) once the weather turns cold again.

Sunday nights at Chez COoksister are soup nights, almost all year round, and this is definitely going on the rotation!