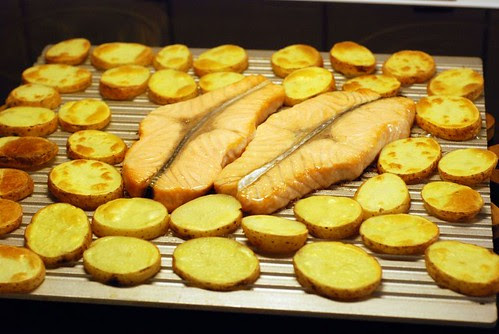 On one of my recent train travels, I leafed through the magazine on board, and found an interesting article about Ipinium: a totally new sort of baking sheet made from a certain new metal. (Or well, not a new metal per se, but a new mix of metals. I won't go into the really technical stuff. Mostly because I can't.) It seemed really cool, and I scribbled down the website address.

A while later, I wrote them an e-mail, asking if this was available commercially, and got an enthusiastic invitation to come and visit their demo kitchen. Of course, that's not something I'd refuse. So I spent a delightful afternoon with the Ipinium team, eating and listening to all the wonders of this new product. Essentially, it's all about heat retainment and heat transfer, and in effect, you can use the oven to fry and grill rather than just to bake. They have two products out at the moment: one double-sided baking sheet which is smooth on one side, ridged on the other, and a funny looking contraption with four sharp sticks, perfect for baking potatoes. (I haven't tried that one yet, but I'll show you photos when I do.) They work in any oven, since you just use your existing rack to put the sheet on. However, this works best with convection ovens, apparently. 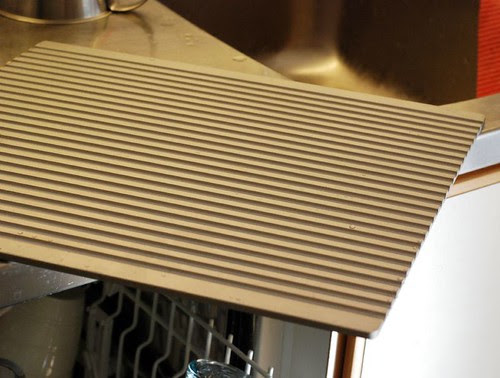 So, what does it do? Well, you preheat the sheet, then place whatever you want to cook on it, as dry as possible and at room temperature. No oil, no butter, no marinades. Just plain. You can add fat or seasonings later. The selling point is that not only does it cook a lot faster (it really does - sliced potatoes take about 10 minutes, salmon, meat or chicken takes 7-8.) but you get a really good surface crust. Which is kind of surprising with no fats, but it really does work. I've only tried salmon and potatoes at home, but it was definitely a success. I tried bacon on the smooth side, and that, too, was great. With bacon, I had a lower temperature - about 225°C. With the salmon and potatoes, I had it all the way up to 275°C as was suggested to me. You have to have the sheet really warm to get the surface to really brown. (Probably the Maillard reaction, right?) 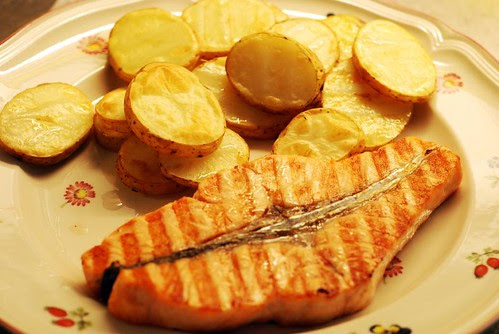 A rimmed baking sheet is next in their production, which I think will be *very* convenient for, say, slow braises? You could brown it directly in the sheet, giving your meat a good color, and then lower the heat and add braising liquid.

As for me, I want to try baking on this. I don't have a baking stone, and I think this will be a pretty good substitute. I've also tried roasting peppers on this, and that went brilliantly. It was a lot faster than usual - that's really nice. I don't have a gas stove, so I can't roast them over open flames as so many suggest, so the oven is really it for me. 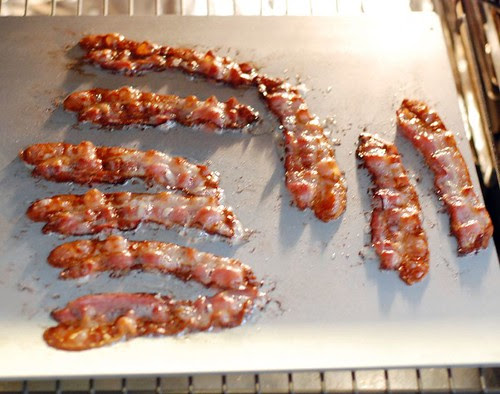 If you're interested in learning more, you can drop an e-mail to info@ipinium.se - you can tell them I sent you! The products are available online from their website, but also in some stores. Not sure how they've expanded abroad yet, but I think they're about to launch in several countries.
Posted by Anne at 07:07

That is very intersting, thank you for sharing it with us :) I use most of the time regular baking trays lined wiht Telfon sheets... they do very good job, but there is surface crust... something I'm very interested in!!

I want fat with the potatoes ;). Otherwise it seems really nice, would you recommend it over a regular baking variety and such as other non-teflon baking mats?

(this is a space issue - I open the cupboard and stuff falls out!)

Well, I generally use teflon baking mats as well, but this is not so much a non-stick product as a way to get really good heat.. I haven't tried it for baking cookies, but I think I'll try it with parchment paper in that case, just for sake of convenience. As for space issues, this is completely flat and I really like that - it takes up minimal space.

And Jessika, at the demo, they brushed the top of the potatoes with flavored oil, and that was excellent :)

That's really interesting - like the speed factor and those nifty easy peasy "grill" marks!! My problem is that my *&^%$ rented kitchen has an oven that's smaller than standard - I think it's 50cm or narrower, so no standard baking sheets fit properly. So will have to hold fire for now :(

I use my baking stone - I preheat it and then bake. It's brilliant. But I always wonder if I should be doing this.

Cool. Souns like a healthier way to cook yet acheive some fancy results.

this seems like a really nifty thing to have in the kitchen. I've been trying to find out where to get hold of a decent baking stone, but this can be used for a lot more. And the reduced cooking times are one hell of a bonus. Plus the health aspect of not needing any fat. Wonder if it can be used in gas ovens.

Thanks for the link, I'll definitely bookmark it.

Interesting. Is it faster than using an actual grill pan, or just easier?

And if it absorbs heat so well why not make a regular pan out of it? Why does it have to be in the oven?

I'd check their site but my Swedish is rusty ;)

Hi Anne
where in South Sweden can i get this? And do u know the price for it?

Caramella - I don't think a gas oven would change anything, it should work the same way.

fatb - I think part of the allure is that it's convenient to use the oven rather than a pan, and that the short cooking time is partly because you have heat all around, in the oven.

Karlsfoodie - I think it's going to be sold in all Electrolux Home stores, or you can order from the website. As for price, the sheet costs 650:-

Anne, How much does this new cooking pan cost?