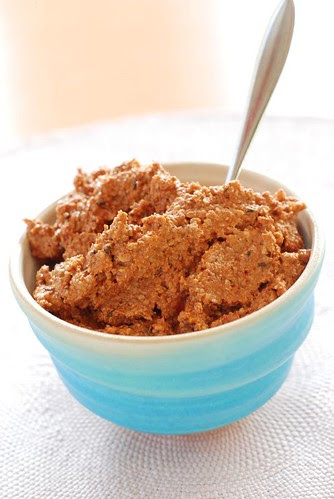 Muhammara is something I've been wanting to try for a very long time. This Middle Eastern dip with roasted bell peppers and walnuts sounds extremely alluring, and I've been eagerly collecting recipes for it left and right. And not knowing where to start. Until the craving really, really hit a few nights ago, and I had to make it immediately. I turned to Clotilde at Chocolate & Zucchini, who, like me had read a lot of recipes and then made her own version. That seemed like a fine place to start indeed. I changed a few things about her recipe (and I halved it) but pretty much stuck with it. I accidentally left out oil, but the results were so good I just won't bother with it when I make it again.

This freezes very well, so don't worry about leftovers. The flavors take some time to develop, so try to make it one day in advance. Eat it as a dip, with toasted pita bread, on baguette rounds, on crispy rye bread, or treat it as you would a pesto. I bet it'll be great with pasta! I served it as a sauce with grilled salmon and that was a wonderful match as well.

Do try to get pomegranate molasses, because they impart such a delicious sweet-sour-tangy flavor. Balsamic vinegar will work, according to Clotilde, but it won't be the same. I got my bottle at a Middle Eastern market, but I've seen it in regular supermarkets as well.

Deseed the peppers by cutting around the stem, and pulling. Shake them to get rid of all the seeds, and any pale membranes you can get at. Roast them - either on a grill, over an open flame if you happen to have a gas stove, or do it my way: in the oven, at 225°C, for about 30 minutes. Turn them every five minutes or so, so that they roast evenly. They should be black in some places when they're done, and completely soft.

Place them in a small bowl and cover with plastic wrap. Let them steam for five minutes, and then peel them. The skins should slip right off. Let them cool.

Toast cashews, walnuts and cumin in a dry pan until golden and fragrant. Let them cool.

Time for the food processor! Combine all the ingredients, and blitz away! Taste it to see if you want any more seasoning - I needed to add a bit more chili and lemon.

Recipe in Swedish:
Muhammara
Posted by Anne at 08:17

That sound very interesting, Anne!
Have you tried dukkah?
For some reason I was reminded of that when I read this recipe.
Have a great week!

Yum! Reminds me of the Spanish romesco sauce, so I bet it would be lovely as a sauce for fish, or chargrilled leeks.

It looks good, but I've never even heard of pomegranate molasses. :/

And how do you have that laying around when you get a craving?

Anne, this dish is absolutely wonderful! I made it a while ago from Clotide's inspiration too. Everyone raves about it. Yours looks absolutely fantastic!

Anna, I actually haven't! But thank you for reminding me, I have to try it!

Foodycat - definitely along the same lines :) It'd be brilliant with leeks!

Fatb - oh, but it keeps very well so go ahead and buy a bottle :)

Greg - ahhh, yours look great too!

By the way, I have found that the roasted red peppers in a jar work perfectly well. Makes it even easier.

I would never have thought of making a dip like this but it sounds delicious.