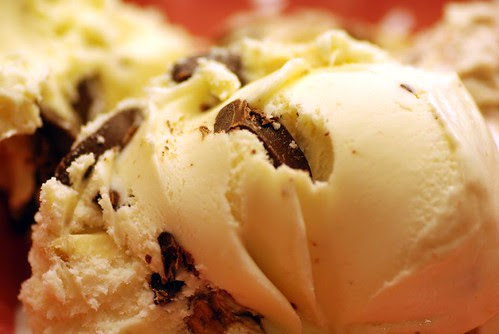 My first choice for premium ice cream - if I can't have homemade - is definitely Häagen-Dazs. And my favorite flavor? Strawberry. Plain strawberry. Which is not sold anymore. It's re-named Strawberries & Cream (at least in Sweden) and sorry, it's not the same. Still good, and still my favorite.

Ok, I got that out of the way. Because this post is not about that, it's actually about the three (well, two) new flavours that Ben & Jerry's just released here. Jesper hooked me up with three pints, and I've been happily slurping my way through them.

One is not really new - it must just be re-released - but that doesn't mean it's not good: Chunky Monkey. This is a lovely banana ice cream with walnuts and dark "chocolatey" bananas. And while I'm at it, let me tell you how annoying I find the fact that they don't use real chocolate in their ice cream. They have great organic ingredients, it's fair trade certified, they obviously care about getting the best flavour - so why settle for "chocolatey" instead of proper chocolate? I don't get it. Anyway, rant over. It's a great flavor combination. If I could change another thing, I think I'd have lightly caramelized the walnuts. (So I think I'll do just that, this summer!) 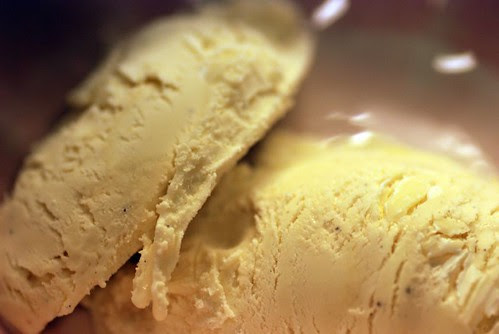 Then, we have Baked Alaska. This is pretty funny. They have the tagline "If it melts it's ruined - take it from the ice cream guys" and that's a pretty amusing way to put a serious message. Again, the company obviously cares. This ice cream is apparently completely climate neutral, and the proceeds go to Climate Change College. And what's more - it's actually really tasty. I didn't expect to like this all white ice cream, but it's really quite lovely - vanilla, with marshmallow swirls, and white "chocolatey" (again!) polar bears. I love the polar bears, by the way. But be forewarned - this is very, very sweet. 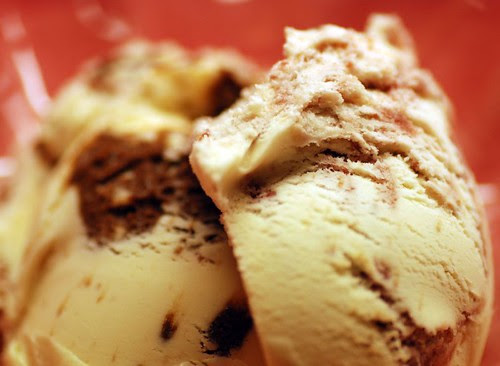 Third, Bohemian Raspberry. Amusing name - and the proceeds here go to the Mercury Phoenix Trust, in memory of Freddie Mercury. It's vanilla ice cream with raspberry swirls and brownie bits. I don't particularly like cakey stuff in my ice cream, so this wasn't up my alley. Nice flavors, but the textures didn't quite work for me. It was Per's favorite of the three though, and I'm sure many will love it.

It does seem like Ben & Jerry's have pulled my favorite from the Swedish market though - Cherry Garcia! And my second favorite as well - Vermonster. Sigh. Which one is your favorite?
Posted by Anne at 19:48

Phish Phood, is my absolute favorite. But I am pretty happy with Chocolate Fudge Brownie and Fossil Fuel if there is no Phish to be had. I really look forward to try the Baked Alaska, it sounds like something I would love. Not that I think there would ever be a Ben and Jerry's ice cream that I wouldn't like to eat, but the polar bears sounds extra special, and cute :)

Chocolate Fudge Brownie. Pieces of cake is the very best thing in icecream :-) And these makes this icecream extremely chocolatty, which I just love.

My second favourite is the Häagen-Dazs Strawberry Cheesecake. With pieces of dough. Mmm, cakey.

Oh - "peace of cake" and "Chunky monky" are my absolute favourites. Any Ice cream with pecan or walnuts will do! :-)

... And the brownie one, how could I forget that one? *slaps forhead*

B&J icecreams are just far too sweet for my liking, I think I enjoyed one called Dublin mudslide once upon a time though.

But as you mention, I think it sounds like a caring and fun company to work in! A bit like lovely Innocent really:)

Haägendazs is basically the only commercial ice-cream I like, my favourite is lemon cheesecake (which alas I can't seem to find anymore), but cookies & cream is pretty good, and macademia.

Ben & Jerry's Strawberry Cheesecake -- my number one. Two. And three.

I've been trying to be good and not eat fatty ice cream at all lately, so hadn't noticed. Bummer!

I was recently told that Ben & Jerry's Oatmeal Cookie Chunk ice cream is the best stuff ever and that I must try it so I'm on a mission this week to find some!

Back when I could eat wheat, it was the Cookie Dough, but now it's the triple caramel.

Chubby hubby without a doubt! Its that salty/sweet/creamy thing going on. y.u.m.
Thanks for the info.

OMG, has to be Phish Phood!! Fell in love with it as soon as I arrived in the UK and nothing has changed. I do also like Chubby Hubby.

B&J Cinnamon bun- icecream is my favorite - aswell as the oatmeal cookie dough one... My favorite icecream of all though is Italian gelato - pistachio and hazelnut!

hello i live in oslo and i cant find the ice cream ben & jerrys here...can anybody help me? where can i get ben & jerry ice cream here in oslo? :-(

if you can let me know please.

I KNOW where i can find ben & jerry ice cream in oslo now...anyways thx for not helping...i helped myself haha