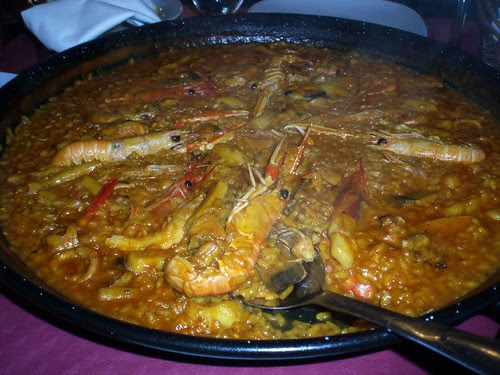 I have to show you some of the food we ate in Spain! Granted, I only had my pocket camera, so it's not perhaps the best shots - but still, it'll give you some idea. 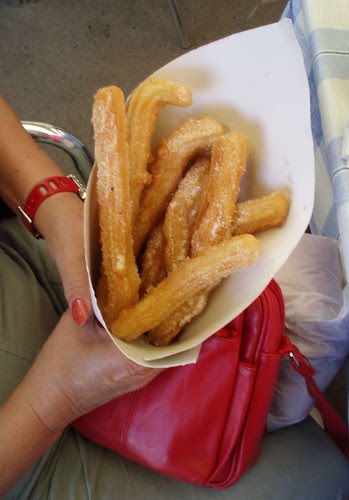 Churros, delicious sugary treats that are somewhat like donuts - a dough is piped directly into bubbling oil, and fried until golden. It's then dusted with sugar and eaten right away. I bought these at one of the markets we went to. 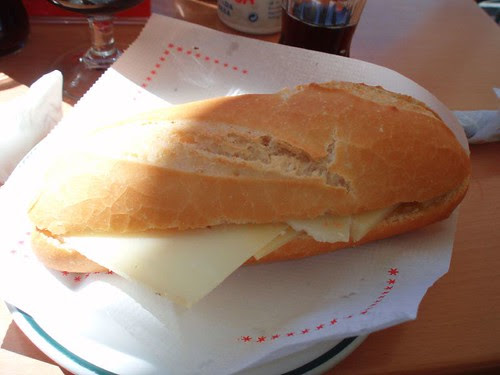 A humble, but oh-so-good, bocadillo con mancheco, a sandwich with manchego cheese. Eaten at a small café on the square behind the Alicante food market. 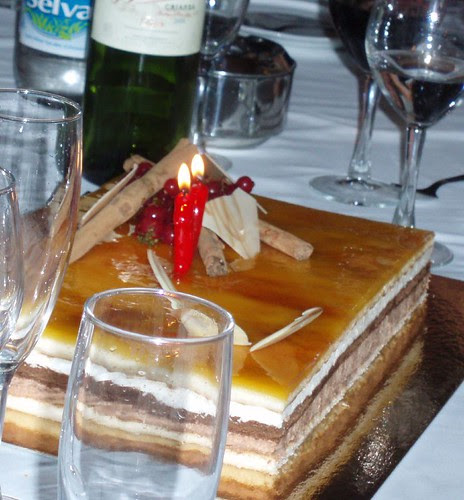 Birthday cake for Marita, a friend of my parents, at Bodegón La Pena in Pilar de la Horadada. Totally delicious - it had layers of white cake, chocolate cake, cream, chocolate mousse, and was topped with caramel and red currants. 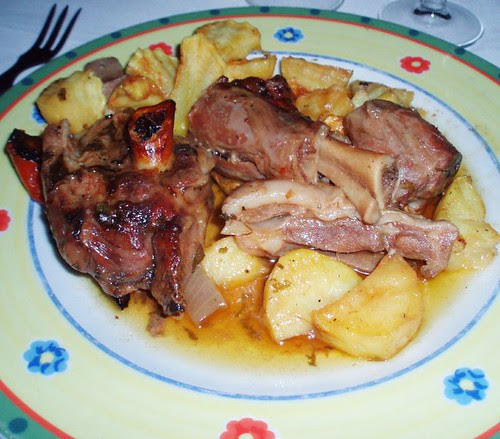 Cordero asado - grilled lamb - at the same restaurant as above. Simple and greasy, but totally tasty. We had some mixed starters as well, and the gambas al ajillo - shrimp with garlic - were my favorites by far. 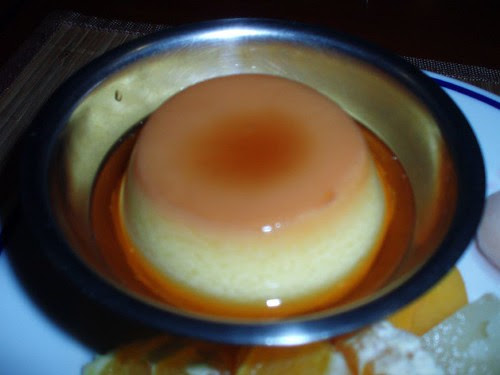 Flan. I admit to not being a huge fan, this is a little too wobbly for my taste. We ate this at a wok buffet close to my parents house. Not fancy, but surprisingly good and fresh food.
Posted by Anne at 17:45

Did you have the chocolate that "usually" goes with churros?

Jessika - no. It was a really hot day, and the stand didn't offer it anyway. And besides, the sugar on these was quite enough :)

Yum!! Manchego cheese, among my favorites. Everything looks delicious...even the greasy lamb :) I've been thinking about traveling to Spain next year (I haven't been there yet, but it's moved a little higher on my list of late). Thanks for the inspiration!

And thanks for the advice on good substitutions for quark.

That all looks wonderful! I am going to Spain this week and you've got me all inspired!

Ahhhhh, memories. We are kind of obsessed with Spain after our trip to Madrid in January. Thanks for the trip down memory lane! That paella looked amazing. If flan scared you, you should check out the weird, crazy tapas we tried in Madrid (here's the post: http://www.weareneverfull.com/unusual-tapas-we-ate-or-madrileno-specialities/


It seemed as though you really enjoyed Spain. Now I want to go back!

Aren't churro's the best? It's like somebody decided crack wasn't addictive enough.

And that cake looks awesome. Is that a particular style or what? I mean, if I was to magically transport myself to Spain right now, what would I ask for?

Deborah, I love manchego too! So delicious!

Foodycat, oh, I hope you have a great time!

Fatbastard, sadly I have no idea. We were a pretty big party and it was pre-ordered. My guess is that he just asked them to fix a birthday cake, I don't think this is a particularly Spanish sort of cake, but I could be wrong, of course...

It has been some time since I have read your blog and... in the meantime you have visited Spain! :)

I love Alicante, I usually go there during summer for my vacations ^_^

Last time I went I also visited a wok buffet (now there are tons of them all around Spain, it's the Chinese invasion!) at the Plaza Mar2 mall and it was very good, although the waiters understood no spanish whatsoever :S

Hi! I’m the Community Manager of Ruba.com. We’re building a website to highlight some of the most interesting places travelers around the world have discovered. We’ve read hundreds of blogs about Spain and we think that this post is great! We’d love to highlight excerpts from blogs like yours (assuming it’s OK with you of course) and to discuss other ways of tapping into your expertise if you are interested. I’m at erin@ruba.com.
Thanks! :)

I've always wanted to make flan. But the whole caramel making process gives me the creeps! I tried once, and it failed. May be I should give it a try once again bcoz this looks amazing!