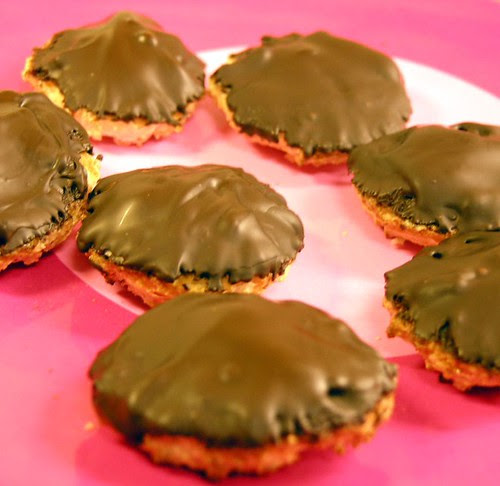 Ah, finally! Here's something I promised to make last year, but never got around to. It's a much loved Swedish cookie called Chokladbiskvi. A biskvi is made from almonds and sugar, and filled with buttercream, then glazed with chocolate. I've translated it into macaroons, because the cookie part and the filling part is indeed very similar, and I think that's the origin of this cookie. You can find it in pretty much every café in Sweden, but few people make their own.

You can play with flavors, but this is the most popular kind. I've got one favorite besides this though - banana buttercream, and really bitter chocolate glaze. Yum! I might try making that at home sometime.

I've only attempted this once before, using store-bought almond paste, but my neighbor had made homemade ones for her birthday party and once I had tasted those, there was no turning back. So, the kind neighbor not only gave me her recipe, but also let me borrow her almond grinder. Because that's something you do need here - grinding in a food processor won't give the same results.

This is fairly fast and easy to make, and I find that the most challenging part is dipping the cookies in chocolate. Or to be honest, the toughest part is tempering the chocolate. If you're going to eat these quickly - and there's no reason you shouldn't - don't bother to temper the chocolate, and save yourself the trouble. I tried tempering, but probably didn't do it exactly right. They kept well over night but had started to show a little bit of blooming the next day.

The store-bought biskvi typically has much more buttercream than mine does. If you want that, more of a pyramid shape, double the buttercream recipe.

And do, DO, try them with coffee. It really is a match made in heaven. 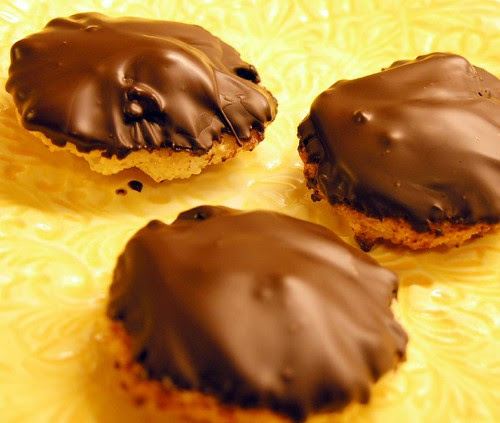 Blanch and peel the almonds. Let it dry, and grind it finely in an almond mill. Mix with the powdered sugar to a grainy mass. Beat the eggwhites (just a little) and mix them with the almonds and sugar to form a smooth paste. Spoon rounded dollops of paste onto baking sheets lined with baking paper. (Use a piping bag if you want them to look neater.)

Beat all the ingredients for the buttercream until smooth, and then spread this liberally on the completely cool cookies. Spread it on the bottom of the cookie, which is now the new top. Place the cookies in the fridge or even in the freezer for a while, as this makes them much easier to dip in chocolate.

Melt the chocolate and temper it if you want to. Dip the buttercream quickly. This is easiest if you have the chocolate in a small, deep bowl. Set them on a plate to firm up.

Recipe in Swedish:
Chokladbiskvier
Posted by Anne at 18:25

Well done, they look beautiful!! F is always asking about mandelbiskvier, but I've never dared to do them :-)

Could you make this with almond meal or flour?

Paul - I've never seen either in stores here, but presumably almond meal would work. Flour would be too finely ground and not give the right chewy texture.

soon you'll be making vacuum cleaners as well ;). it is intended for the non-swedish readers not to understand zilch. Mostly because I'm an evil woman ;)

Wow - these look amazing!! I've just had lunch and now you've got me craving something sweet ;-)

Just made these cookies, and they are wonderful! They are just rich enough, a perfectly balanced cookie!

I make my buttercream like candy starting with a simple syrup cooked to the softball stage 230-234 degrees and then drizzling the syrup into raw egg yolks while they are beating in a mixing bowl. After that I add the butter and the cocoa. I found this recipe in an old Sunset cookie book and have been making it for close to 20 years. It is simply the best cookie ever.

So funny...I was looking for a recipe I remembered from Karren M. and found this page. And here she is! This is simply the best cookie I've ever tasted.