This year, I dare.. what, exactly? 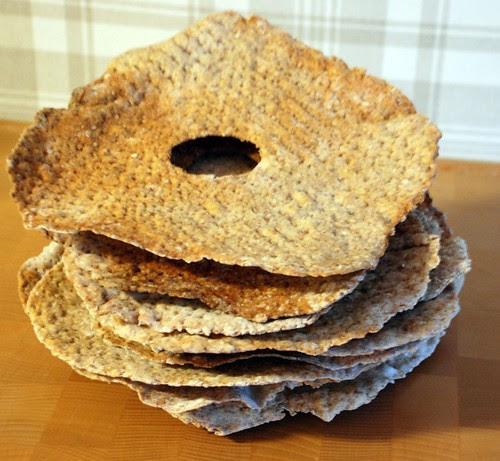 For the past two years, I've made foodie new year's resolutions, choosing five things that I want to make in the coming year. That has gone.. well, not so well the past year. In fact, I've only managed to make one of the five things. That, my friends, that... sucks. So I'll have to finish off the backlog, obviously, and to be honest, there's a few things left from 2006 too.

And last year, I promised this:
-Sushi (Nope, didn't get around to that)
-Chokladbiskvier (I've come quite far with that one - so far as to get my neighbor's favorite recipe AND borrow her almond grinder. So, soon, I hope!)
-Glace au Four. (At least I have a recipe. That I look at from time to time.)
-Vegetarian Week (this was just a bad idea, I think I'll scrap it. It's not much of a challenge, since we eat a lot of vegetarian food, but it doesn't hold much excitement either.)
-Swedish Crisp Bread. In fact, I made it twice.

So, this year? I have a few ideas. Not very many though, so I figured I might take requests! What do YOU want me to make this year? Leave a comment and let me know!

To start this new year off fresh, I have a new profile picture - taken last night, feeling festive and pretty, so I hope you like it! I had at least one reader e-mail me last year (ha! It wasn't very long ago) and saying that I looked so sad in the previous picture so, hey, time for a change.

And I want to direct you to two of my favorite food blogs that I discovered in 2007. If you haven't seen them already, you're in for a treat. Me, I'm happily browsning through their archives, giggling aloud at their great writing, and marvelling at their pretty pictures and detailed instructions. I really love both - they're similar in one way, but very different in others. Witout further ado, I give you:

Go on. Try them for yourself. Maybe you'll find new favorites as well.
Posted by Anne at 14:55

Happy New Year! You do look lovely in your new picture. Great blog!

Would you share your neighbours recipe for chokladbiskvier? It is my all time favourite cookie!
Happy New Year and I look forward to a great year reading your blog.

We've had exceptional results with this recipe for gnocchi, if you want to revisit that one.

We made them once with onions, peas and pancetta, and the second time baked with a gorgonzola cream sauce. Yum!

They're easy and turned out well both times -- sturdy enough for baking, but also tender and tasty.

Have you ever made homemade lefse? I was just blogging about my dessert last night where I layered lefse with chocolate. I bought it at the store but have never made it. Perhaps that's something you could try? Or maybe you are a pro at it already.

Looking forward to 2008 enjoying your blog.

I am so impressed by your weight loss. And the new picture is very cute! Happy New Year!

Jennifer - thank you! I do want to retry that one, it was so annoying to fail.

Greg - I've never had lefse at all, nor seen it in Sweden - in fact, I had to google it :) But definitely a possibility - was it good? :)

Love the new picture!
I tried gnocchi once and they went very badly, so I will watch with anticipation for a recipe that works.
Happy New Year!

I have been reading your blog for a while, but never commented yet. I really enjoy it, though, so thank you for the interesting posts and wonderful pictures!

It looks like someone has already posted a tried-and-true gnocchi recipe, so I won't offer that- but I do have a very good sushi rice recipe, if you need it.

I am surprised that you have never heard of lefse! It is relatively popular in the US among people of Scandinavian descent. I made it for the first time this year and it is really a challenge. You do need quite specialized equipment to make it, though.

Nora, sushi rice recipe will definitely be needed, unless I cheat and ask my brother in law to just.. get me some rice from the sushi restaurant. (Definite possiblity)

Lefse is Norwegian, I think? Well, although Scandinavia might be small and close together, the cultures are quite distinct, and while some food is shared across the region, a lot is not. :)

You really should give making your own sushi a try! It's a wonderful idea for a smaller dinner party and it goes quite quickly to make alot! Just prepare all of the ingredients ahead of time (make the rice, freeze & slice the fish & chop the other ingredients). Then let your guests help make norimaki rolls together. :) Delicous!
Other foody things you can experiment with this year is African cooking. I'm trying to learn more about it myself and would love it if you included African recipes every now and then on your blog. :)

Yes, Lefse is Norwegian. I like it. They use some kind of wooden stick to flip it over traditionally. I think you could do it with standard equipment.

I do sushi rice quite simply. The important thing is to use a good asian somewhat sticky rice. My favorite is korean rice, but a Japanese rice woks also. I simply cook it in the rice cooker then season it with rice vinegar mixed with some sugar (if it isn't already sweetend). Toss it together when it's hot and let it cool. I fluff it up every 5-10 minutes while it's cooling. I don't even measure the proportions. I would say for 4 cups of cooked rice, 1/2-3/4 cup vinegar?

Here's an on-line video I found about it here:

Thanks for the blog recommendations. You're right, they are both fantastic and I have bookmarked them both. If you come across more gems please let us know. As for the pictures, I liked them both; you are very pretty.