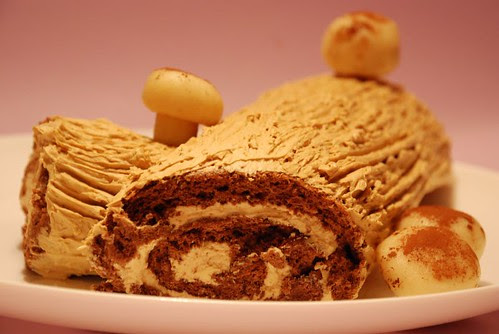 Yes, I'm a huge Twin Peaks fan. But this post is not about that, it's about the latest from the Daring Bakers! We were asked to make a yule log, something I had never done before. Or so I thought. I read the recipe, and realised that it was pretty darn close to a classic Swedish "Dream Cake" which is a chocolate swiss roll with coffee buttercream. And.. so is this! Although slightly different. I decided to use a different filling for my log, to get some variation, and it turned out lovely. Thanks for a fun challenge, Ivonne and Lisa! I really appriciated that it turned out to be a quick one - except for the mushrooms, I was done in less than an hour and a half!

This cake has four elements, and I thought I'd comment on them individually.

1. The genoise cake. This was a breeze to make. Eggs plus egg yolks and sugar, whisk over simmering water (my only problem was that the bowl of my Kitchen Aid does not fit very well over any of my saucepans, but oh well!) and then whisk with the Kitchen Aid until cool. At that time, I had a huge, fluffy, pale yellow mass. Into that, I folded sifted corn starch (1/3 cup), regular flour (1/3 cup) and a scant 1/3 cup of cocoa. A breeze! I baked it for 7 minutes - 10 would have been way too much - and then performed my mother-in-law's trick: take a sheet of baking paper and sprinkle sugar on it. Invert the cake on top so that it's sandwiched between the two papers. Then, let it cool, and remove the top (which was the bottom) paper. Ta-da! 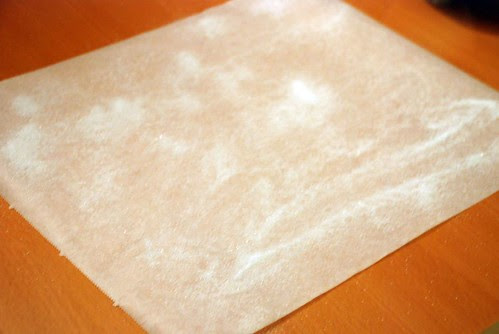 2. The filling. I have for some time now wanted to try a Dumle ganache. A ganache is basically cream and chocolate of some sorts, and Dumle is a Swedish candy. It's a bit like Rolo if I recall correctly - chewy soft caramels with milk chocolate? Super tasty in any case, and the thought of a light fluffy mousse with this.. ah, heaven. So, I chopped up about 125 grams of Dumle, heated 300 ml cream, poured together and then stirred until smooth. It must be absolutely cold, so I left it in the fridge overnight, and beat it until thick and mouss-y just before using. Worked like a charm! 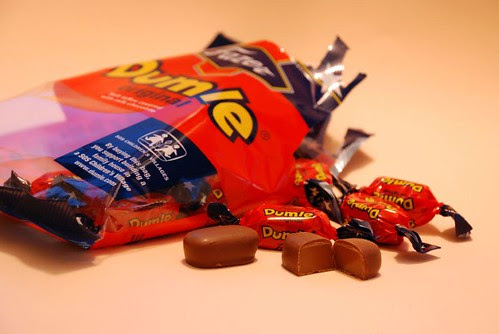 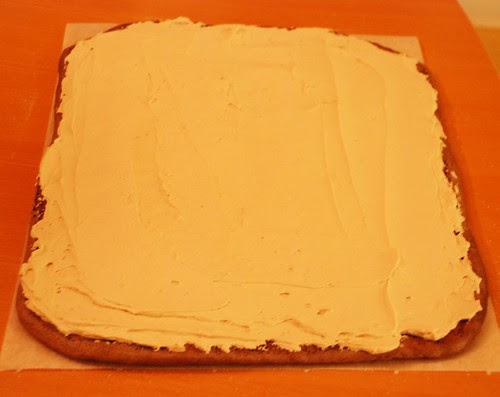 3. The frosting. I have never made buttercream with egg whites before, but I was excited to try it. Now, I made half the recipe, and the only problem with halving is.. the human factor. I had printed the recipe, the full recipe, and although I added the two egg whites rather than four, I then added a full cup of sugar, whisked and realised that this seemed a bit thick. I then realised that it was I who was thick, poured it out and started over. Went much better. The meringue part was no problem, but after adding most of the butter, I thought the cream was breaking. It looked curdled and grainy. I didn't panic, and I realised that I was still using the wire whisk and not the paddle. So I switched, gradually added the flavoring (I chose Kahlua, a coffee liqueur, to dissolve the coffee in) and then beat for a while on high speed. Wonders - it turned smooth! 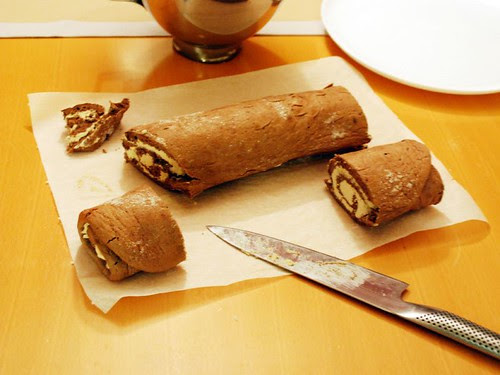 4. The decoration. Well, as you can see my log is the bare minimum. Mushrooms. And they're made of marzipan. Which was a breeze to make. I admit, I didn't follow the recipe, I just used a hunk of almond paste, a "little" powdered sugar and a dash of white baking syrup. It worked out lovely, and was easy to shake. I smudged a little cocoa onto them, and well, mushrooms!

All in all - a fun challenge that took surprisingly little time to make, and was pretty tasty! The buttercream was definitely best when it was first made, I liked it less on the next day, but the cake and the filling benefited from an extra day of resting.
Posted by Anne at 12:25

Anne you always impress me with your baking talents and this was no disappointment!

What a beautiful log and that filling sounds scrumptious!

Wow. You did yours quick and with ease. I like the filling additions. Looks reaaly good.

Anne, I agree, a very quick and easy challenge. What took the longest for me was decorating and that's because I had the help of an honorary daring baker (my daughter) for the task. Your Yule log looks mouthwatering and I love the ganache filling.

Looks beautiful! Maybe/Hopefully my experience will be as smooth next time! :) Happy Holidays!

Beautiful!!
Sounds great. Fun to see all the variations of logs!

Your cake is lovely. The filling sounds devine.
Merry Christmas!

Wonderful! What an interesting filling.

Oooh I want to try a Dimple!
Log looks great!

Bare minimum works well for me! Helps on the waistlines, especially this season of food, food and more food! Love your log! =)

oohh... caramel ganache. That sounds heavenly. And I find your minimalist approach to decoration refreshing.

Your genoise turned out so well. Mine cracked. I think I overcooked it.

Absolutely gorgeous! Everything aout it sounds amazing! Hope you had a great Christmas!

Oooh, I like what you did with the filling. I want to try a Dumle now :) Great job on your yule log! It looks fantastic.