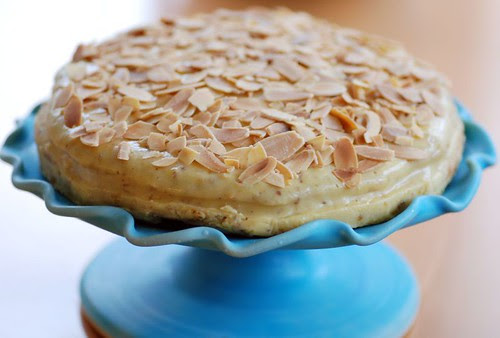 Can you belive it? It's my third blog-birthday already! Time sure flies when you're having fun! And I am, most definitely. And hopefully, so are you. Thank you, thank you so much for reading. And for commenting, and for e-mailing, and for just being there. Thank you.

I wish I could have all of you over for coffee and cake, but as that's not really possible, let me at least share a recipe for a delicious cake. As it happens, this is probably the most sought-after recipe that I get e-mails about. By far. See, this simple little cake, with almond meringue layers and almond buttercream, was Oscar II:s favorite cake. (He was the king of Sweden between 1872-1907.) Nowadays, it's many people's favorite, and most of them across the world can find this at Ikea. It's produced by Almondy and sold frozen.

In fact, that's how we get ours as well - at any supermarket, frozen. They make a few versions - one with chocolate, one with Daim, even one with Snickers - but I've always liked this one the best. In fact, it's the cake we served for our wedding! (Yes, bought ready-made, frozen. Yep. It's that good.) So, since we always buy this ready-made, I've never had a recipe for it. For this blog-aversary, I thought I'd make an effort to actually make one from scratch. Turned out that it wasn't hard at all, and a lot of fun. And delicious - a bit fluffier than the bought version, but still very similar. Give it a try! This one has almond toffee in the buttercream, but you could use chopped up Daim if you want to make that version, or why not a few spoons of instant coffee to make a mocha variety? A bonus: it's gluten-free.

Or check out the archives:

Start with the cake layers. I made four layers, but you can do two or three, depending on what size you want it to be. My layers were about 20 cm across. (I have a pretty small cake stand that I wanted to use, which is why I chose that particular size.) You need to draw circles (or whatever shape you want, obviously) on parchment paper, and spread the batter carefully within those shapes. They'll keep their shape nicely in the oven and not run out. And you can not bake just one cake in a pan and cut it into layers - it won't have the same texture at all.

Beat the egg whites until stiff, then fold in sugar and ground almonds. Bake at 175°C for about 15 minutes. The layers should be fairly golden.

Make the buttercream. Mix egg yolks, sugar and cream in a saucepan, and cook on low heat, stirring all the time, until it's thickened. It'll thicken when you least expect it to, so don't leave it! You might need to turn up the heat a bit if nothing happens. Remove from heat, add the butter gradually and stir until it's all incorporated. Leave to cool completely.

Make the toffee: melt the sugar in a small saucepan. Coarsely chop the almonds, and throw those in the pot. Stir and cook for a few minutes until the almond is fully caramelized, but make sure it doesn't burn! Pour onto an oiled baking sheet or a silpat mat. Leave to cool, and then pulverize it in a pestle and mortar. Mix into the buttercream.

Toast the almond flakes in a hot, dry pan or in a hot oven. Leave to cool.

Sandwich the cake layers with buttercream, and top with a lot of buttercream over the entire cake. You can freeze it at this point - in fact, I recommend it. It'll keep together much better that way, otherwise it can be a bit slippery-slidey. Just let it thaw at room temperature for about half an hour, and sprinkle with toasted almonds just before serving. (They'll go soft if they're on the cake for too long.)

Ps - this cakes fits the bill for this month's theme of "Waiter, there's something in my... Layered Cake." Hosted by Andrew - check it out!

Recipe in Swedish:
Oscar II:s tårta
Posted by Anne at 09:52

Congratulations! I bet you never expected to go on for three whole years when you started this blog! Enjoy your success!

Happy blog anniversary, Anne! And thanks for the cake recipe - I've been waiting for it ever since you mentioned it in Tallinn:)

(And I just have to tell you all that this cake that Anne made was wonderful!)

you have come a loooong way dear, and i have been your serial lurker since time starts to fly :) keep it up!

Hi Anne - i've been reading your blog for about 10months now - pretty regularly ever since I found it...congrats on the 3 years, you're love of food is very infectious and inspirational! ...and I'm in Australia and the time differences means that when I'm up late doing uni assignments there's often a new posting from you for me to read around 2am (my time, anyways) !!! its great ;)
Jess

Congrats!
I'm soon going to celebrate my 2nd one.

Hi from southern California,
I check your blog every day for cooking inspiration and fun writing. I have to say the grams throw me off, but I forge ahead! Please pray (or your equivalent) for those in the paths of the fires. We are close to the coast and should be fine, but many others are not. Cheers to you and your lovely cats,
Anna Banana

Congratulations and happy blogging birthday!! Here's to many more!!

Congratulations Anne! You are fantastic (and I'll never forget that you answered my mail nicely even though you were about to get married a couple of days later)!

this is my favorite foodblog.. i always "start" here and use your links ;).

Congratulations on your blog anniversary!
I just love that you had Almondy cake at your wedding.

Congrats Dear Anne, you have a beautiful blog, with nice recipes,your Dad like the Cake????
xxxxxxxGloria

Anne, I'm not surprised a bit. It is always so lovely to visit here that no wonder everyone keeps coming back. Here's to the next three. Congratulations

Anne, I'm not surprised a bit. It is always so lovely to visit here that no wonder everyone keeps coming back. Here's to the next three. Congratulations

I stop by your blog daily & always enjoy reading your posts!

Congratulations! Three years thats a great achievement. The cake sounds wonderful, just my kind of thing and I know someone who has a wheat allergy which gives me the perfect excuse to try it. Thanks :)

Happy birthday to your blog, Anne. I found a recipe for King Oscar's cake in the Swedish Cakes & Cookies book.
I have to compare to see if your recipe is the same. Congratulations!!

Ilva - no indeed! I really didn't think about the long-term effects at all :)

Jess B - ooh, glad I can cheer up some of those long study nights for you!

Anna - you're very much on my mind, as are my close friends on southern CA. :( It's very worrying!

Viktoria - oh, you're so sweet to remember that :)

Pene - it's probably the same! Rutiga Bakboken, which I got this from, is from the same publisher's, and is basically the same book but larger. :)

Hi Anne! Please take my huge congratulations with anniversary of your blog! WOW! Three years! Three years ago I even didn't know what blog is it :) Now I have a several my blogs and I am happy I have a possibility to find many new friends in all the world and to discover a new cultures, and in food too. I would like to say you that Ukrainian cuisine has a very rich traditions, and I hope one time we will speak with you about Ukrainian recipes.

Congrats on your anniversary!

Here in Norway the mentioned cake is very popular as well, and it's called 'suksessterte'. The main difference is that we normally don't add the toffee, which makes the cream bright yellow instead.

Wow! Three years is quite the accomplishment!

And that cake looks marvelous! It reminds me of a giant macaroon!

Happy anniversary Anne!!! I discovered your blog only a few days ago and I'm already addicted to it. I can't stop reading...your blog inspired me so much that I've started blogging myself today:)

Congratulations, Anne! I know I've told you this before, but your blog was one of the very first I ever visited, and it's still one of my favorites. I remember seeing your cute little visitor counter and thinking, "Wow! She's had 22,000 people visit her blog!" And now of course you're nearing the one million mark. One million! Time sure does fly by, doesn't it? Thanks for your delightful and delicious blog, and again, congratulations to you! xo

Thanks so much, everyone!

Susan, that's just mindboggling! I rarely look at that counter (I have another statistics program and mostly track day-to-day progress) but.. you're right, it's nearing a million! I can't believe it! Wow, I really have to celebrate THAT day :)

Chiming in late here, but -- CONGRATULATIONS!!

I love your blog. Always have.

I'll keep an eye on the counter in case you forget to check it. ; )

Oh, that reminds me. I think mine is nearing the one million mark, too! Yes, I'd say a celebration is definitely in order!

I think I could fall in love with this cake. It looks just wonderful! King Oscar had excellent taste!

Congratulations on your 3rd blogaversary!

You see, I stumbled upon your blog today while in search for a recipe for King Oscar's Cake and there you were!

I was thinking of including a note on this week's food list of celebrations and wanted to include a bite about Sweden's National Day on June, 6th tomorrow. I realize it is rather late, but I was wondering two things. 1) Is the National Day in fact June 6th? 2) would you mind very much if I linked to your recipe?

Thank you so much for your time. I need to nosey around, I'm liking it here:)

Thanks for sharing, Louise

Louise - it's indeed Sweden's National Day on June 6, and you're more than welcome to link to the recipe! :)

Thanks Anne, I didn't get to it this year but I've saved this post for next time. I'm also adding your link to my side bar for assurance.

It's just so tasty:)

Thank you so much for sharing...

Thank you for your time and the recipe. I will let you know after I bake this cake for easter.-ebru