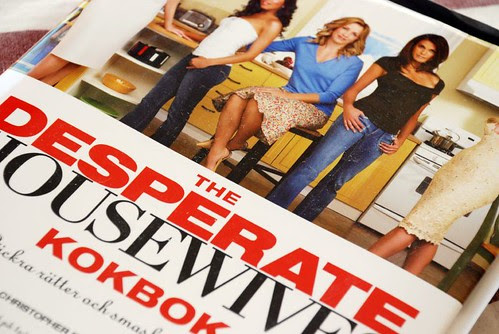 I have to admit it: I'm a TV-addict. I love watching TV-shows! (My current favorites? Heroes, Prison Break and Dexter.) And I have to admit a certain fondness for spin-off products. Obviously, cooking related ones are extra fun, so I already have the Sopranos cookbook, Cooking with Friends, and now; The Desperate Housewives Cookbook. Which is charming - just charming.

Those of you that have never watched the show, you might want to take a pass, but all those who gleefully follow the lives of Bree, Susan, Lynette, Gabrielle and Edie, this is the book for you. I really enjoy the concept here - each housewife has a chapter with recipes that she'd enjoy making. Bree's section holds elaborate, from-scratch recipes that will take a long time and yield fantastic results. Susan's section holds "idiot-proof" recipes - or even "Susan-proof". Lynette's has a lot of family favorites, Gabrielle's some fabulous party food and also some beautiful Latino recipes, and Edie's? Well, Edie doesn't cook much. So it's all about making an impression without much effort. And who doesn't like that?

It also has a few recipes from "the neighbors". Nice touch. In addition to the recipes, the book has a lot of photos from the show, and some trivia snuck in here and there. The actual recipes are written by Christopher Styler, who has previously written several other cookbooks. I haven't tried anything just yet - but everything looks easy enough to follow, and much of it looks really good. So, in conclusion - if you love the show, you'll probably enjoy this one a lot! If you don't like the show - well, don't bother.

Link to Amazon.
Link to Adlibris - Swedish online bookstore.
Posted by Anne at 20:15

Sounds fun! I do like the show a lot, even if I haven't seen it recently, as we've been without a telly since May. But I like the concept of personalised chapters - I can imagine just how different Bree's and Edie's chapters are:)
Now, do you think they'll ever publis "Without A Trace" cookbook??

Oh, I am a sucker for concept-cook-books even though it isn´t that politically correct.. When I was little, it was "Pelle Svanslös"-cook-book ("cooking with Donald Duck", I guess you could compare it with) and now it more like "Fry it with Veronica Mars" or "Brees baked Beens"

We are a huge fans of Desperate Housewives especially my significant other. ;) He loves prison break, lost and Heros too. I didn't even know they have this cookbook. This would make a very interesting gift for a fan. :) Thanks for sharing.

I did not know they made a cookbook. I enjoy watching Desperate Housewives since the start of the show.

I want to have a look at it out of curiosity and to be able to judge its value. This cookbook can certainly add an entertaining touch in a bridal shower basket.

I Just watch Desperate Housewives from this week and Bree is making a Lemon Merengue Pie wich looks delicious... Do you have this receipt in this cookbook from them?
Please if so can you send me?
thanks and since I found your blog I will become here now more often to taken some receipts...
Aliane

by the way my email: ckaleidoscope@gmail.com

Hi there! I just found your blog.
You've convinced me to take the DH cookbook off my Amazon "to buy" list and finally order it!
If you like, you can take a peek at my blog too
http://travelingwilbury.wordpress.com/