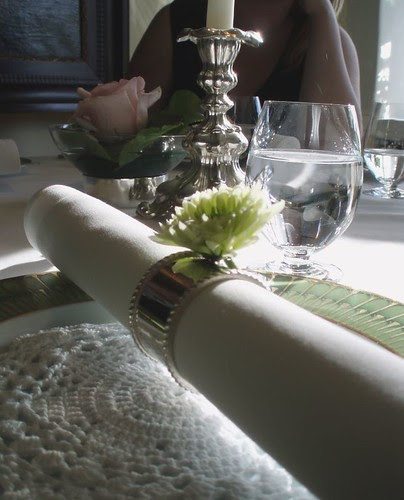 Yesterday, we had an absolutely fabulous meal at Edsbacka Krog. It's an old restaurant - opened in 1626 - and one of the very best in Sweden. Not only is the food superb, they also have wonderful service. The chef is Christer Lingstrom - whose new cookbook I'm lucky enough to have, more on that another day... We were treated to their large spring and summer tasting menu by our dear friends, Tesse and Danne. And quite a treat it was! Luckily, we got to take the menu home with us, and it even provided translations - a blogger's job made easy. 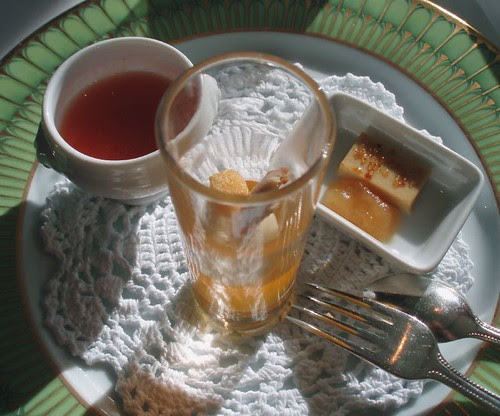 The evening started with a complimentary trio of amuse-bouches, not on the menu. In the shot glass, there's a bouillabaisse jelly topped with a little smoked herring, a dab of aïoli and a tiny crouton. (I found this mostly weird - very salty and rather strange.) The miniature soup bowl holds a cold tomato and rhubarb soup, and the tiny dish holds caramelized foie gras with baked apple. 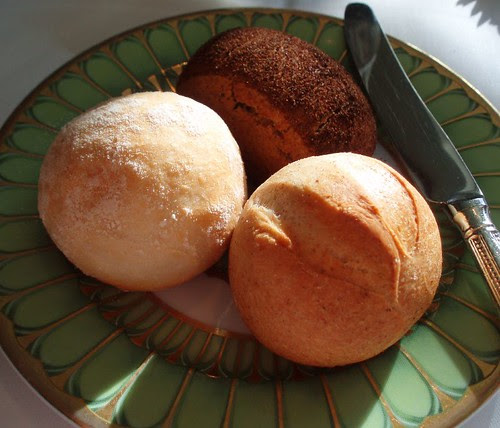 Next came what might not be considered so special in many cases, but definitely was here - the bread basket. It held three kinds of rolls - all miniatures. One was regular wheat, one was lemon and one was dark sweet rye. There were also crispbreads (that looked suspiciously like Wilma's, a great brand that I have in my cupboard) but we didn't try any of those.

The butter was also lovely. In addition to regular butter and sea salt, we got a whipped butter with apricots and.. rosemary? I am not completely sure. But it was delicious! 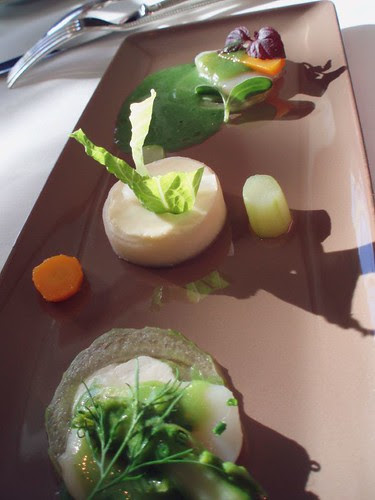 For our first course, we had "Scallops served cold with cucumber and an oyster vinaigrette". This was presented three ways - I can't remember exactly what was in each, as they tasted fairly similar. A scallop mousse was definitely involved. The sauce was served tableside, and although I couldn't detect any oysters, it was very tasty. 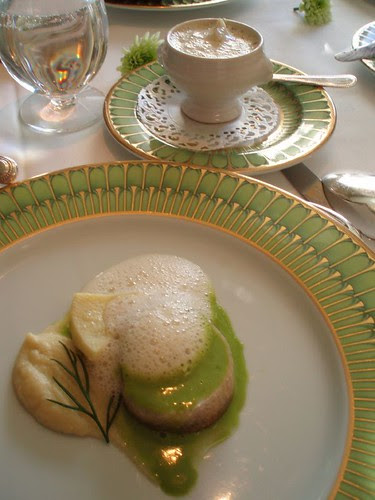 Second, "Fillet of sander with a touch of blue mussels, fennel and artichoke". This was delicious, and probably my favorite dish of the evening. The sander was perfectly cooked, and served on a bit of artichoke, with a fennel purée and a mussel foam. Alongside was a small pot of new potatoes in a mussel broth - and *that* was even more spectacular. Such good, clean flavors - I could have eaten a big soup bowl of this and been quite happy! 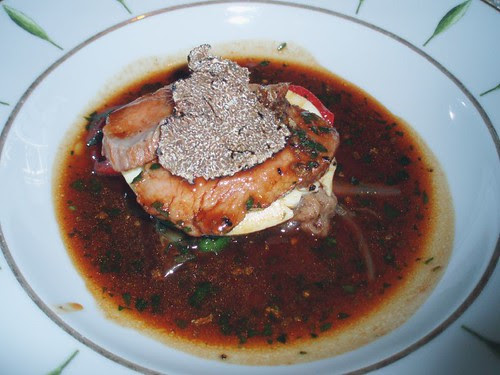 And next was a yummy dish called "Summer truffles, baby spinach and veal infused in a warm bouillon flavoured with "ramslök". Ramslök is a wild herb, and I think it's similar to ramps that you can apparently find in some parts of the world. It's sort of garlicky, fresh and mild. I'm not sure what it contributed here exactly, but the dish was very flavorful and the veal amazingly tender. It was perched on a round of thin omelette - in Swedish, they called it an open ravioli. Interesting! 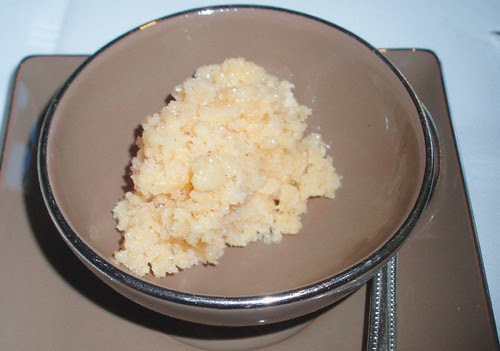 I think this is where we were served our second bonus dish, a plum and yogurt granita. Very refreshing! 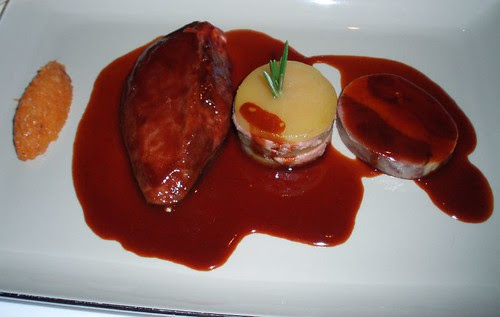 This was "Roasted pigeon followed by sea buckthorn, onions and chocolate". The pigeon breast was probably my least favorite, I didn't much care for the texture of it nor the very gamey flavor, but it was also served in the little roulade to the right, and I believe it was pigeon's liver along with potatoes in the second little round, and those were very good indeed! The orangey mound on the left is shallots cooked in sea buckthorn (delicious!!) and the sauce was a red wine sauce with dark chocolate. 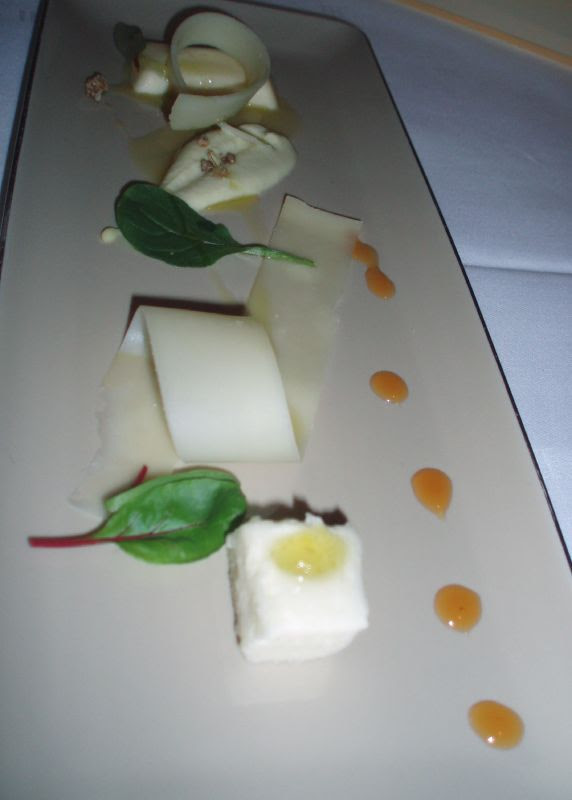 Next came a cheese creation. It was one cheese - a Comté - made in three different ways. First, a cream that was perfect with the honey dots on the plate. Second, ribbons of cheese with a sharp lemon purée with fennel seeds. Third, my favorite, closest to the camera - a mousse with lemon confit. Yum!

This was a pre-dessert, also off the menu - a little ginger brûlée in a rhubarb consommé. I loved the rhubarb in this, and would have licked my bowl if I had dared. 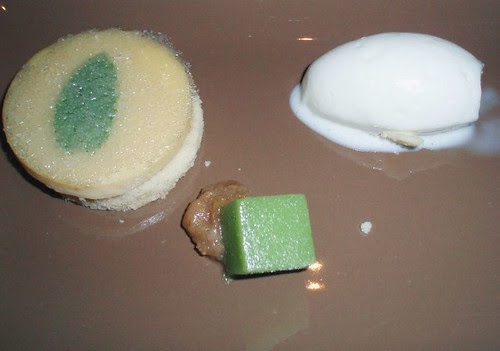 In the menu, this was called "Gooseberry, sugar peas and mint teasers", but I'd describe it as a gooseberry brûlée on a small cookie with a mint leaf and a sugar crisp on top, then a cube of pea jelly with grape compote, and a scoop of fresh mint ice cream. The ice cream was.. indescribably good. I must make my own. 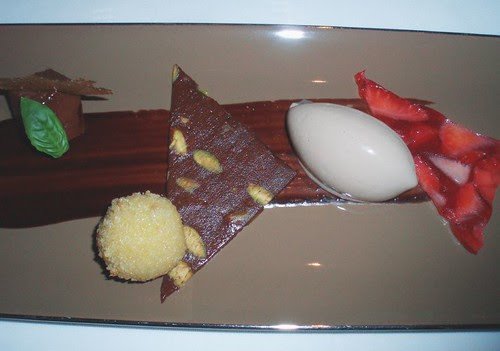 No meal is complete without chocolate. Edsbacka knows this, and thus offered a selection of chocolate desserts for our final dish. Set on a smear of chocolate sauce, we have a basil chocolate truffle, a fried wild strawberry cream, a pistachio terrine, chocolate ice cream, and a strawberry terrine. Everything was super tasty - and I was especially fond of the basil truffle. Also very tasty, the deep fried wild strawberry cream. However, as we all noted, this was something like the deep fried pies at McDonalds. Tastier, of course, but still, it gave off a little something of.. well, the similarity was there. But in a good way, for sure.

The service, as I said in the beginning, was quite incredible. Two waiters would clear our table and present the new dishes each time, and in between any courses that might cause crumbs, the tablecloth was brushed off with a little silver dusting device. (This was quite amusing.) Didn't dare snap a picture of that, though! 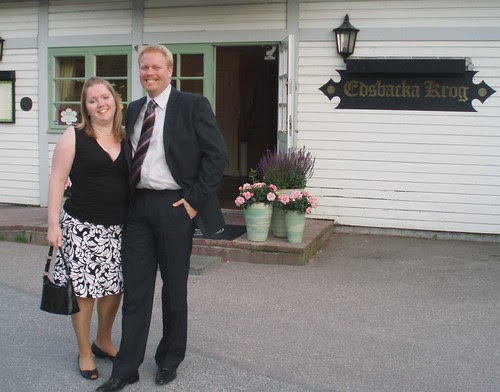 Tesse and Danne outside the restaurant. Thanks guys - this was a really special evening!
Posted by Anne at 22:33

This sounds delicious - even at this time in the morning my mouth is watering!

i would have loved this meal! i especially like the idea of the cheese course... very innovative! and i had to think of pille, who brought me some bucksthorn syrup when she came over the last time - unknown here!
what a fab meal, know where to go next time i'm in stockholm!

Seems tasty! But what's up with swedish food on square plates?? Trying to figure out the bouillabaise-jelly, but no matter how hard i try, it just comes out, just as You said, weird..
Pretty blog though!
peas
/olle