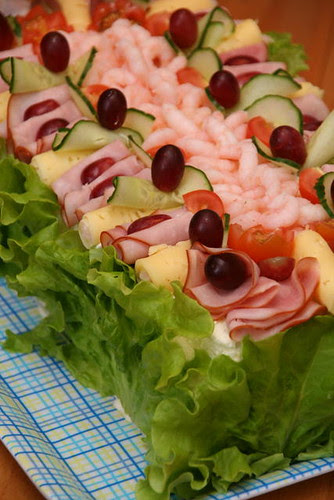 I have a guest blogger today! Lena, who blogs in Swedish here, is here to tell you all about the Swedish culinary specialty called sandwich cake, or "Smörgåstårta". I haven't manager to talk much about this before, because it's one of my dark secrets that I.. don't like it very much. I'm fairly alone in this, everyone else seems to love it and applaud loudly when they are served. I shudder, ashamedly, and take a small piece.

Lena served this one for her birthday and it was one of the best I've ever tried so I asked her to share the recipe with all of you. You can find it in Swedish here. 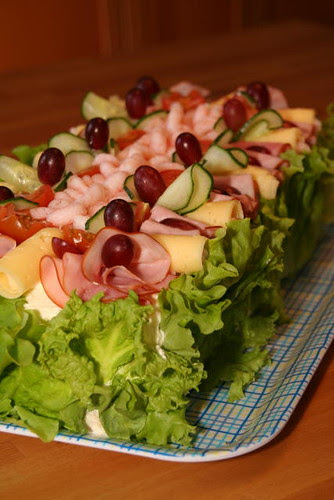 Smörgåstårta, or sandwich cake is often served at big parties, such as for graduations, birthdays or as a late night snack at a wedding party. The cake is basically a large sandwich with several different creamy fillings and then topped with vegetables, seafood, ham and cheese. My sandwich cake is made with a soft fluffy rye bread, which is a little more resitant to becoming soggy than the toast bread which is commonly used. For filling I used three very different spreads, it may sound strange to combine sweet fruit with shrimps but it works - I promise, and it is yummy.

I used the following for a cake that was about 16 x 32 cm:
8 rounds of soft rye bread, or if you like, use toast bread
400 g of skagen mix (see here for a recipe Skagen mix )
200 g soft cheese with smoked ham flavour (I used this one,
but any type will do)
a large can of fruitcoctail in juice
300 ml of cream

Cut the bread to the shape you like and divide it so that you can make three layers of filling. If you are using a bread that is a little bit thicker and the bread have a crust it could be good to cut away the crust so that the filling can soak in to the bread. Whip the cream, mix a couple of spoons of whiped cream with the soft cheese to make it even softer. Remove the juice and chop the fruit into small pieces, mix the fruit with the rest of the cream. Build your cake by putting the skagen mix on the first layer, followed by the soft cheese on the next, and finishing with the fruit on the last.

Cover the cake with plastic clingfilm and put it in the fridge over night. One valuable tip when filling your cake, more is better, a dry sandwish cake is not
tasty.

Rinse the vegetables and the grapes and leave to dry. Whip the cream and cover the sides and the top of the cake with a thin layer. Mount the sallad around the cake with the cream. Garnish the cake to your as you like, with one rule, you can not put to much stuff on the cake.

Here's another one who's not so fond of it... Basically it's because it almost always contains stuff I dislike. I don't like seafood at all and Skagenröra is one of those hateful things. And I don't eat boiled eggs at all. What more? I can't rememer right now. There are some sandwich cakes I find okey, but they are rare.

I think these sandwich loaves used to be popular here - I see many recipes for these in older cookbooks from around the 1960s. They're usually filled with chicken salad, tuna salad, etc and frosted with a cream cheese mixture. I've never seen a live one though!

So far I have read your blog "secretly", with out commenting, but on this I have to tell you: You are not alone! I have never really liked smörgåstårta and I am grown up in one of those swedish families where it is a real celebration when you get it...

Recipes/stories like this one are a particular reason why I read your blog, Anne. I love to read about things that are customary foods in other countries that might be completely unfamiliar to me. I find it especially amusing when you admit to not liking certain "traditional" dishes (and based on the comments it seems you are not alone.)

The cookbook junkie - how interesting! They're in my old cookbooks too, but it's just as popular today. If not more.

Bean, I'm glad you enjoy it! I cook rather few traditional things, so I'm glad I have friends that can help out! :)

I don´t like it either and thought I was a rare breed...and I´m having it tomorrow. I prefer "landgång" that is a long open sandwich with different topping that you eat one after the other I like one thing at a time, as I prefer the sauce on the side. But when you don´t know how many people to expect "smörgåstårta" is a good choise and people usually like it!

Sandwich cakes - võileivatort - have been popular in Estonia since mid-1980s, if I remember correctly. There are endless varieties re: fillings, my favourite are tuna filling, ham & cheese filling, and smoked salmon ones. I love the ones I make myself, as I choose the fillings (no shrimps ever!) and make them perfectly moist. Shop-bought ones can be rather disappointing often.

Pille - a-ha! How interesting to hear that they're popular in Estonia, too! :)

Oh I love Sandwich cakes - well, wellmade ones. My mom made one last year, and I truely thought I was in food heaven, she didn't add the usual ingredients, but anything she tought would be good, and I'm telling you it was really good :) So I think you should make more sandwich cakes :)

Kaleen, good to hear that there are are at least one more sandwich cake lover, like me, out there :)

Anne, of course they are! I've even blogged about them few times :) Dagmar has had lovely sandwich cake recipes on her blog, too..

Pille, I do remember yours now! :) And I've seen Dagmar's, too. I guess I've mentally blocked it out :)

I guess food culture is changing, but I for one, am one of those who love Smörgåstårta, and have done so since I was a kid.

On occasion, I make it for my birthday celebrations, and if there is any over, once the guests have munched on it, it's usually gone the day after. It's just so good I can't stop eating it.

Well, here is an American that LOVES sandwich cakes, the more fish the better! The problem I have here in America making them is that we don't have the same kind of soft cheese. Now I have an idea of how to make it by adding cream to our flavored cheeses! Thanks so much for the recipe....my Swedish husband will be thrilled to have a taste of home once in a while!
Dawna

Hi Anne, I just found your blog and am loving your swedish recipes. My great grandfather immigrated to the US and I am keen to keep the swedish traditions alive. Recently I was visiting family in Sweden and was introduced to Smörgåstårta and loved it. I made it for my family in Australia and they loved it as much as I did. It has now been requested for christmas eve this year.
Thanks,
Jane

Sandwich Cake, what an incredible invention. On a recent trip to Sweden to visit my husband's family I got a taste of this creative little cake. Now I'll always make one for our children's birthdays, and came up with a tortilla version with a mexican twist. I'm from Hawaii so my husband thinks a poi and lomi salmon version would be interesting, but..... ahhhh blah.

Does anyone know the history of Smörgåstårta or links to any site that has this?

I absolutely love Sandwich cake. Maybe if I had grown up with it, I may not be so enthusiastic. But love seafood, bread, cream, cheese, so how could I not love it. Thanks for the inspiration. I plan on making my own version, and have appreciated reading the blogs and the tips also contained in the comments.

I have lived in Sweden now for 6 years and to me it is soggy bread with seafood. I have seen varieties with roast beef and/or turkey that look better, but just cannot get past the mayo soaked bread. Hubby wants to make a small one for national day.............maybe.........