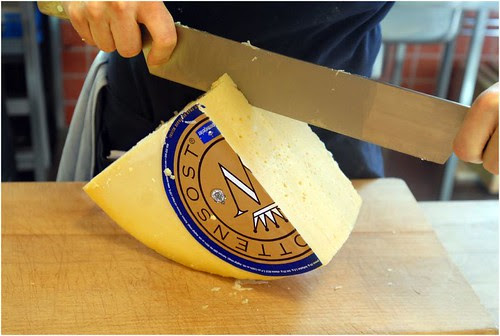 Yesterday, me and Dagmar of A Cat In The Kitchen, went to a cheese seminar. It was hosted by Västerbottensost, Västerbotten Cheese - which is a very special cheese indeed. It's made in a small dairy in Burträsk in northern Sweden, and it's very strictly regulated. It's been made in the same way since 1872, when it's rumored that a dairy maid named Ulrika Eleonora Lindström made a mistake. She was constantly interrupted in her work, and the fancy version states that it was due to a handsome farm boy who came to see her. You can choose to believe that, or the more boring version where Ulrika Eleonora just had too much to do. (Very likely, giving the working conditions in those days.) Either way, she was interrupted, and the cheese was altered because of it. And what a delicious mistake it was!

The cheese is still made much in the same way, using the same process. It's aged for at least 12 months. (We got to try an early cheese, and one that had rested longer - and it was a huge difference.) The cheese itself is a very flavorful, assertive, fairly hard cheese (although not as try as a parmesan or a pecorino) with tones of caramel. It's rather sweet, and has a delicate balance between sweetness and bitterness. Really - if you get your hands on it, do try it. It's great for snacking on as it is, but can also be used in cooking. I used some last night in a pasta dish with broccoli and bacon, and this morning I tossed in a small handful with my scrambled eggs. (Yum!!)

The seminar was given because of the Västerbotten Cheese Scholarship, which is a competition for culinary high school students. The winner was Jesper Kansten, who had created a very interesting dish with a warm pork terrine with apples and mushrooms, a Västerbotten cheese cream with celery, some Västerbotten cheese sticks (I have to try those this summer - they sound brilliant!) and saurkraut-boiled tiny onions. Exciting stuff, and congratulations Jesper - well deserved!

We didn't get to try the winning dish, but we did get to try a great variety of dishes that really showcased the versatility of the cheese, which was of course a component of every dish). My favorite was an asparagus pie with pine nuts, and a vegetable carpaccio of cooked yellow beets, thinly sliced and drizzled with cold-pressed rapeseed oil and pumpkin seeds. There was also a salad with chicken, avocado and mango, and a roasted red pepper soup with grilled shrimp. And almost the best - a simple butter mixed with grated cheese, served with excellent bread.

Check out Dagmar's post too - she has some great photos. And a very nice write-up - where she nicely forgot to tell you that due to me forgetting to print a map, we got really lost and wandered for almost half an hour before finally making it to where the seminar was. So sorry!
Posted by Anne at 18:30

Sounds like fun! Aharon and I quickly devoured a block of Västerbotten cheese I brought home from Sweden last September. I've still got a wedge of another Swedish cheese I really like. It's got a black label with yellow writing. XO, is it?

Shelly, if its a Allerum XO you are a very lucky person, its one of my favorites :)

Västerbotten cheese sure is one of my favorite cheeses. Very likely since I was lucky to grow up in that area of Sweden and my mom happily exchange other cheeses with this one when possible. So to me it tastes homey.

The story I heard is that she drank a lot of coffee and at her prev. job someone made coffee for her, but then she came to Burträsk she had to make it herself and doe to that she left the pot unattended and Västerbotten cheese was born.
Anyway it was it´s delicious!

I saw it as a nice sightseeing tour of Gärdet :-)

Thank you for sharing such yummy fun - I love your Blog!

I wonder if one can get your cheese here in the US? I will have to check this out, looks yummy!

I love Västerbottensost! It was such a change from mild Swedish cheeses when I was growing up. After I ate västerbottensost I could feel the pulse beating in the roof of my mouth!

Ann-Mari Nilsson, the propriator, also ships food items all over the USA!