English food is no joke. 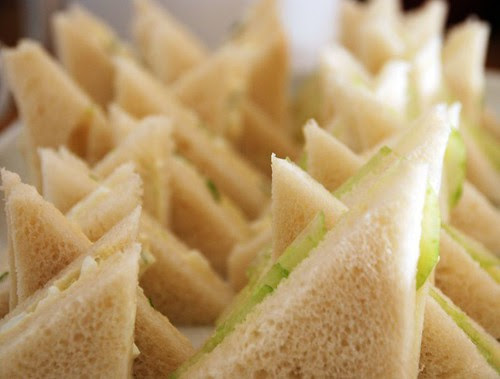 English food is no joke. Or is it? I told my husband about the event that Sam is hosting - Fish and Quips, and his immediate response was "let's make Spotted Dick!"

When I think of English food, I think of Afternoon Tea. And there's certainly nothing funny about that. (Or is it?) I think it's a rather lovely tradition, and I much enjoy the ritual of it. Not that I've ever had afternoon tea in England, but quite often in several Stockholm cafés. And I enjoy making some of it at home, too, of course. These tiny sandwiches were served at my Tupperware party, and they turned out to be very popular.

Now is also a great time to tell you about a thesis I once wrote when I was studying English. It was about the language of puns, and whether or not they were easier to understand for native speakers than for foreigners who had English as their second language. (Turned out to be no big difference). It was called - rather obviously: That's Not Punny. I remember my professor chuckling his way through our numerous sessions - my subject was a lot more light-hearted than most of the other linguistics thesises that year.

Anyway. English food is not a joke. It can be great.

Feel free to enter this event too - there's still time! Head over to Sam to find out how! I'm really looking forward to a great round-up!
Posted by Anne at 14:59

If you haven't seen this post yet you should really check it out. Lolo at Vegan Yum Yum made fantastic looking cucumber tea sandwiches a while ago. They look so cute!

Hi Anne - thank for your entry!

English tea is certainly not a joke - fun, not fun-ny.

One month I was working in Sweden, in Goteborg, about 8 or so years ago. I fell in love with the little Swedish Bakeries with their wonderful pastries, cakes and bread. I discovered one such place near where I was working that sold 'British Style sandwiches' - they even had a little Union Jack flag stuck in them.

They were the best egg sandwichs I have ever tasted. The Swedes were playing the Brits at their own game and winning.

So it does not surprise me that as a Swede you should decide to write about these sarnies.

But please don't stop your husband from showing us his spotted dick, as well, if that's what he wants to do!

Oh English food is quite nice I think! They're always inventive when it comes to vegetarian dishes and alternatives.

Egg-cress sandwiches are something I always long for & miss - can't be found at home.

And yes, well, afternoon tea - one of life's heavenly things! :)

I'd actually love to read your pun paper. :) My boyfriend, who is Portuguese, is obsessed with puns in English and absolutely delights in coming up with them, yet has trouble thinking of Portuguese ones. I'm a native English speaker, but also seem to more readily recognize puns (including cross-linguistic ones) when using other languages. We've actually thought about studying it, too - just think of the fun of coming up with experiments!

I think the chip butty is a good example of Englishness -putting chips in bread and calling it something.

Your sandwiches look so like little chicks in a row or little birds. They look so refreshing!
May I ask what type of camera you use? I am in the market for a new one and your photos are awesome!

greatbigvegchallenge - I'll try to think of something! Cucumber is a pretty easy veg to eat straight up, but harder to cook with..

April - it was totally the most fun paper I had to write during my years at university! :)

Deb - oh, thank you :) I'm using a Nikon d80 now, and it's quite lovely. I really recommend a digital SLR camera if you're interested in photography.

oh no no no!
chip butties are AWESOME!
(that's chips, not crisps)
I haven't had one in years, now there's an idea.

Sam - oh! Chips as in fries, rather than crisps? That changes it! Still not sure if it's for the better, though :) What sort of bread?

English food is DEFINATELY no joke! Of course I am biased, I'm English and I am a passionate advocate of British cuisine. Check out my Blog for my quibbles and nibbles on the subject. Not all of it is British but it is what I spout on about the most, even to the British nation via BBC's Masterchef!

Some friends of mine had a baby shower for me years ago and it was an afternoon tea complete with cucumber sandwiches. It is so delicate and civilized... certainly no joke!