Waiter, there's something in my... Spicy Apple Pie 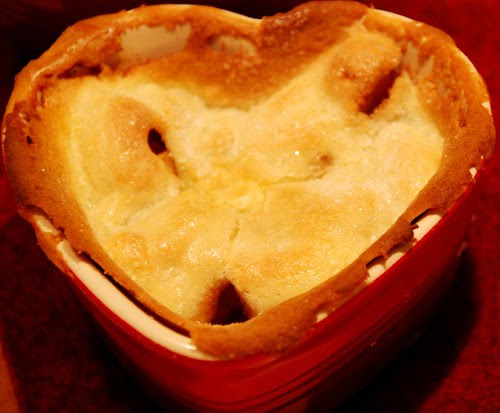 I really like this new food blog event, "Waiter, there's something in my..." hosted by Cooksister Jeanne, Passionate Cook Johanna and Spittoon Andrew. It's great fun! However, this month I was a bit stumped. The rules called for a covered pie of some sorts. And well, I don't really do that. Ever. Could be that I don't like pie crust all that much, so a double-crust pie is out of the question. I did have some brief fantasies about what I like to call a "Donald Duck Pie" - remember in the comics, Granny Duck, whatever she's called in English, always made a lovely double-crust pie with air vents, and when she'd put it out to cool someone would steal it? Anyway, that's what I had in mind.

But in the end, that didn't really happen. Both Per and I have the flu - he's on his way to getting better, I'm a few days behind. I did manage to make these individual apple pies tonight though! The crust is a simple affair, quickly thrown together in a food processor, and the filling is just briefly assembled, fried in butter for a minute or two, and dumped into the container of your choice. I like my Le Creuset hearts, a lot. It didn't come out looking like I had imagined - but well, it's good enough. And it smells divine. And most importantly - it's super delicious. The filling is sticky and spicy, and the crust is just thin enough to impart a nice crunch. I had this with a scoop of vanilla ice cream - custard would be nice too!

Place butter, sugar, milk and the egg in a food processor and blitz. Add flour, and process until the mixture just comes together. Wrap with plastic foil and let it rest in the fridge for an hour. The dough will be enough for at least six individual pies, but you can freeze any leftovers for another day.

For the filling:
1 apple per person, peeled and diced
1 tbsp sugar per person
bit of butter
cinnamon
cardamom
ground ginger

Mix the diced apple with sugar and spices. (Use as much as you want - I used quite a bit of cinnamon, and maybe 1/2 tsp each ginger and cardamom, for two pies.) Melt the butter, and add the spiced apples. Fry for a few minutes until the apples have softened and the sugar has caramelized. Divide into pie dishes.

Roll out the pastry dough on a very well floured surface. (Or you'll be sorry!) Cover the dishes, and remove excess pastry with a sharp knife. Brush with a beaten egg and top with a little bit of sugar. Bake at 200°C for 15-20 minutes, or until pies are golden.

As I only got back from skiing in Italy late on Saturday, I thought I'll post a recipe for an apple pie I made few weeks ago. Eventually I mustered enough energy and made a salmon kulebyaka last night after all, so the apple pie recipe must wait a little:)
I really like the sound of spices in your apple pie, Anne - I'll add it to my already long list of apple cakes and pies!
Get well soon!!

Do all the right things & you'll be better in no time, Anne.

Mmm...that looks lovely. I love the sound of the spicy filling

Anne,
It may not be your thing, but it sure is pretty.

How adorable! I really need to invest in some of that heart-shaped Le Creuset. Your pie sounds glorious, especially since I am on a cardamom kick. Made a pear and cardamom tarte tatin last month and poached pears with cardamom and ginger this month - so your pie sounds super-tempting. Thanks for a great WTSIM contribution :)