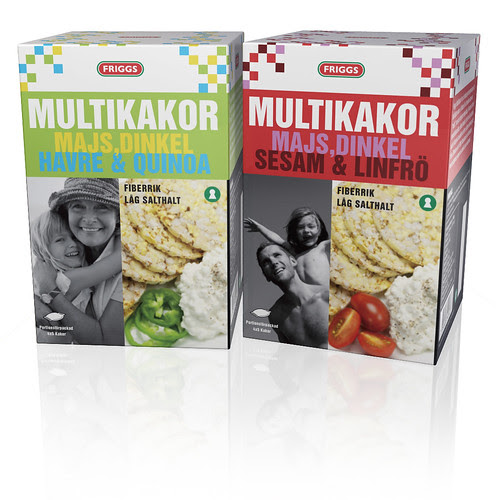 Maybe you've tried rice cakes? Cardboard-y, thick white things, mostly tasteless, that health propagandists try to get us to eat instead of popcorn or other snacks? Well, they just upgraded. To this. "Multi-cakes". (Produced by Swedish company Friggs.) While it sounds just as awful, the result is not bad at all. These still contain rice, but also corn, spelt and other goodies. And they're thin - not at all like those thick discs I remember. And crunchy! I actually like them a lot. Not so much that I'd eat them instead of popcorn, ever, but they're nice for a pre-dinner snack. Good on their own, better (a lot) with a thin slathering of butter and a slice of cheese. Two thumbs up!
Posted by Anne at 09:51

I thought that they sounded really scaring so I didn't want to try them :-O But I'm glad to hear that they are nice :-)

Dagmar - haha! I really thought they tasted fine, but on the other hand, I thought they sounded pretty good too :)

Have you seen the rice cakes with milk or dark chocolate on one side? Those are good too - and I don't fill one bit guilty about eating them! :-)

Monica, what a stellar idea! I haven't seen those, but hey, you could probably dip these in some good chocolate! Huh! Have to investigate this further, for sure :)