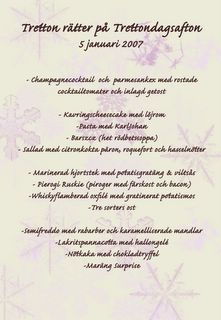 The menu, in Swedish

Last Friday, we not only had kittens - we also had our traditional thirteen course dinner. It was an absolute hit - but with way too much food. Thankfully there was a natural break when Glinda started going into labor, and thus we got a chance to relax our poor tummies...

And no, I didn't cook everything. The way this works - and why it works so well - is that each couple gets to bring three small courses. (an appetizer, a main dish and a dessert.) And to make it thirteen, since it's "thirteen day" in Sweden (epiphany) I'll give you the recipes for my own things later on. (I made four courses, the other three couples made three each - the other girls have blogs, and I'll share the links as soon as they post.) 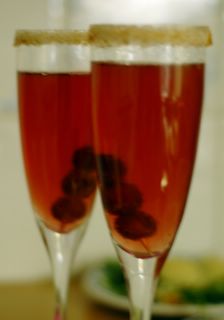 We started with champagne cocktails with grape juice and vodka, and a lovely sugar-cinnamon-orange rim. (Recipe here.) 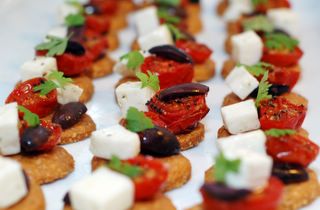 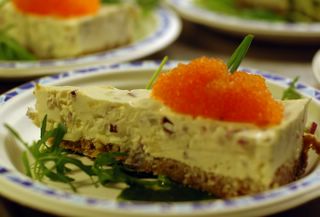 Then we had Lena's cheesecake with red onions, topped with bleak roe. It's on a bed of aragula (rocket) and served with a herb oil. Delicious! (Recipe here, in Swedish!) 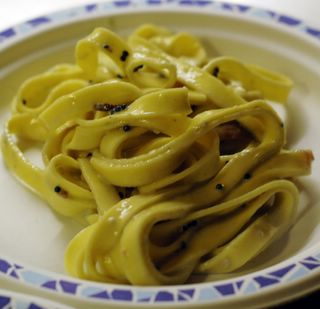 Next out was Danne's small dish of fresh pasta with ceps (porcini), smoked salmon and black roe. Very unusual flavor combination - but it worked out great! 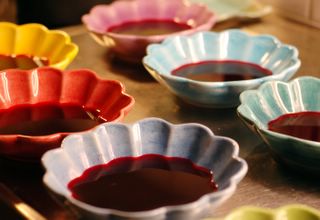 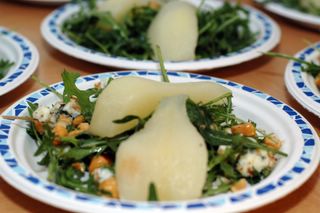 And our final started was a small salad I made, with aragula (rocket), toasted hazelnuts, roquefort and pears poached in white wine and lemons. Recipe here! 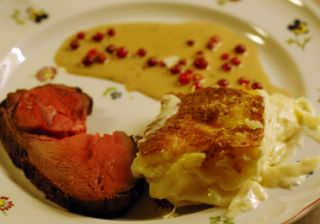 Time for actual food then - Tesse was first out with this amazing red deer roast, that she had left to marinate for two days. It was served with a juniper lingonberry sauce and a creamy potato gratin. 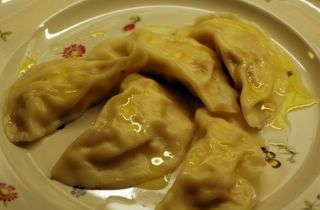 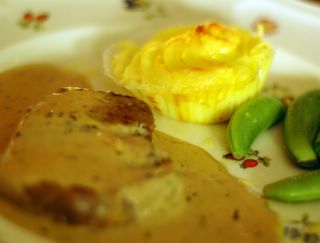 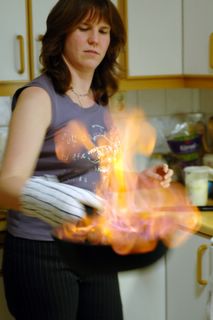 And just look at this cool picture!

No more food, please! Actually, now came the small cheese course, which was three tiny slices of cheese (a sharp blue, a Manchego and a creamy, very ripe brie) and a few small things to eat with it - half a dried fig, a tiny spoon of pear marmalade, and a little fragolaceto, home made strawberry and balsamico preserves. 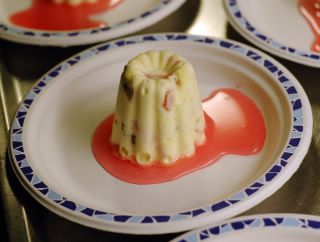 Our first dessert, served after kitten number one, was Dagmar's amazing semifreddo with rhubarb and caramelized almonds. Ah! She has already posted the recipe - here. 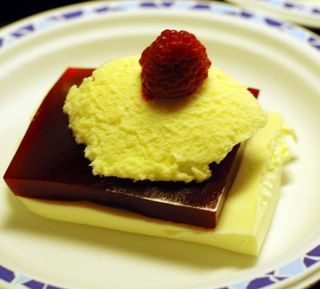 Second was a licorice panna cotta with raspberry jelly and lemon mousse. Lena had slaved over especially the jelly - raspberries everywhere! - but it tasted great! (Recipe, in Swedish, here.) 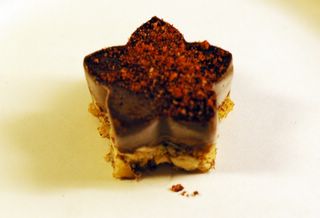 Third out was my little truffle - it's a nut base with pistachios, hazelnuts and pecans, covered with a simple chocolate truffle. I topped it with a bit of finely crushed freeze-dried berries. (Although it looks like chilli in the picture - and that would probably be nice, too!) (Recipe here!)

I don't have pictures of our final dessert - I was busy with the kittens at that point - but it was a dish of lingonberries and meringue that Tesse called Meringue Surprise.

That's it! If you want to read what we had last year, check it out here, here and here.
Posted by Anne at 07:42

What a wonderful feast, Anne! I especially like Lena's cheesecake, Dagmar's semifreddo and your truffles (though all dishes sound good)

Thanks again from both of us for a lovely evening! The food was great, especially the parmesan shortbreads and the pear and roquefort salad. But far too much food and we were so glad Glinda gave us a natural break :-)

Hey! You should sell tickets to that meal next time!! :)

Just so you know, the rocket's other name is arugula. This is the proper spelling.

Thanks for this nice posting.

This is such a fantastic tradition. I'm stuffed just reading about it.

That does look like a great feast! I wish I was there - so many Polish goodies!

What a lovely menu and a very good idea to make three courses each (couple)! Your photos are great too.

Oh WOW, what a cool idea! I loved your truffle dessert and I must say that the parmesan shortbread canapes had me drooling. If you ever need another couple for this dinner, you know where to find me...! ;-)

I am soooo jealous! I am still waiting for MY "delivery"! So we didn't manage to celebrate joint birthdays... well, well, hopefully, I won't have to wait for very much longer!

Bjoern - I'm sure the panna cotta can be made vegan! Most of the other dishes would be harder - loads and loads of cheese :)

Johanna - keeping my fingers crossed that you won't have to wait much longer!! :)

That looks amazing!
I'm already stealing ideas to plan for my next dinner party!