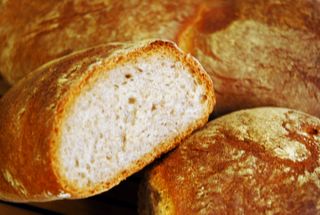 Basil bread? No, not at all - Basel bread. As in the Swiss city! This recipe comes from a famous Swedish baker - Jan Hedh - and he has worked a lot all over Europe. He has written several cookbooks - one on bread, two on chocolate, one on desserts and one on jam - and I have them all. They are great reads - sometimes the recipes are very complicated, but the ones I've tried have been completely worth it.

This particular bread is delicious - it's very fluffy on the inside, but with a strong, crispy crust. It's always formed, Hedh tells us, by putting two small ovals together during the final proving, so that you end up with a double bread, sort of. (You can perhaps see it in the picture above - near the back is a seam.)

It freezes very well too, and can be revived in a warm (100°C) oven for about ten minutes.

Be aware that this will take some time. I usually start the night before and let the starter rise over night in the fridge. Also, you need active sourdough, so if you don't have that - that's where you need to start.

A mixer comes in handy - this bread is worked very much, and I love my Kitchen-Aid for it.

Mix the sourdough with the rye flour. Dissolve the yeast in warmish water (no hotter than body temperature) and mix that in too. Work in a mixer for ten minutes at low speed. Put in a slightly oiled plastic box, cover with a lid and leave to rise for three hours at room temperature or over night in the fridge.

Dissolve the yeast in the water, pour over the starter dough and add flour. Mix on low speed for ten minutes. Add the salt and work for eight more minutes until the dough is very elastic.

Leave the dough to rise in an oiled bowl for two hours. Punch it down three times during this time, this will give a better structure to the finished bread.

Take the dough onto a well floured surface and divide into four parts. Roll into small ovan breads, and put together them two and two. Place on a sheet of baking paper (for easier removal to the oven later on) with plenty of flour. Leave to rise for an hour.

Heat the oven to 275°C with a cookie sheet or a baking stone inside. Move the breads to the hot sheet, and spray with lots of water so the oven fills with steam. This makes the crust crispy.

After five minutes, lower the temperature to 200°C. After ten more minutes, open the oven door a little bit and air for a few seconds. Spray with more water. Repeat this twice more during the total baking time - 50 minutes in total.

Recipe in Swedish:
Baselbröd
Posted by Anne at 07:23

Oh this bread looks delicious, the crust looks nice and thick- which I just love. Sliver of butter and some home-made jam please?!

I hate Jan Hedhs recipes. I made a project out of Bröd but despite following them to the gram they came out miserable. Rebaking yielded the same result. But I keep buying the books for yes, they make a good read, the latest in the collection is Sylt & Marmelad. Lovely and exciting recipes. As for cooking anything in it, don't think so. Most of the recipes seem to require the equipment of a pastry chefs kitchen.

I am the same "Anonymous" that was wondering about lingonberries and golden syrup earlier. Thank you for the explanation, and thank you for speaking such wonderful English! My name is Jinny, I am from the U.S. and I am a cat fanatic that also likes to cook. I like your site, which I found looking up Kåldolmar, but I ended up coming back to peek around at everything else. Maybe I'll put up a site some time when I have something to say, but I'm always too preoccupied to be too interesting. Hey! Maybe Dianka could try some apple butter? I have to get going, have a good day! Nice to meet you!

Dianka - hang on, just about to post a recipe for blueberry-blackberry jam :) (A bit sweet for this bread though, I prefer to eat this bread with just butter and a good, stron cheese.)

Jessica - oh, I know what you mean. They are so, SO involved. And written in a fairly condescending tone, in my opinion. But I must admit that I *am* glad with the results, nothing has failed miserably on me yet. (A matter of time, for sure...) :)

Jinny - ooh, welcome back! Glad to hear from you!! Way good suggestion about the apple butter - that's yummy. I made some last year - long gone now, maybe I should make another batch while there are still apples.. hmm. :)