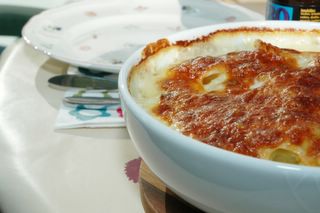 I've actually shared this recipe before, but it's been buried way, way back in many blog posts, and it's really worth a revival. It's great! It can't be made with new potatoes though, so you might have to wait a little bit. It goes with just about anything! You can use garlic greens instead of the leek if you have them - it's a very nice twist.

Warm the oven to 225°C. Saute the leek and the garlic in the olive oil in a large pan. Add the milk and the cream, and a lot of salt. It should taste overly salty, as the potatoes will soak up most of it anyway.

When it comes to the boiling point, add the potato slices, and let them boil slowly for about 10-15 minutes. They should become fairly soft (but certainly not mush!!) and most importantly, they need to release their starch. The liquid will become thick and creamy. When it does, tip into an oven-proof dish, and cook in the oven for about half an hour. Watch it though - it may start to get too brown on top, and needs to be covered with foil.

I Looooove potatis gratäng! it¨s actually what I do best, that and lasagna. :) Sometimes i put a little cheese between the layers aswell or alittle Thyme, MMmmmm delicious... I¨ve made it a few times for visitors and they absolutley loved it! / it¨s not very common here, or not common at alls hould I say..

Looks relatively simple and delicious. Definitely worth a try!

Potato gratin, what a treat! I would love some but I'm afraid I don't think it would be very weight watchers friendly so I'll have to miss out for the moment.

Just wait till the diet is over!

That does look good - I'm a sucker for any gratin.

I'll probably go the whole hog and sautée in butter with a splash of oil though!

thanks! i made this tonight... very yummy.

Dear Anne
thanx for this recipe.missing the potato gratin in sweden badly

Made this for dinner on Christmas night - just fabulous - easy, simple and works really well - the leek makes it. Thanks tons.

I was in Sweden once, only for a day, sadly enough. We ate at this fabulous restaurant in the Gamla Stan that was listed in Lonely Planet. We went there to taste the reindeer steaks with lingon berries. They brought out a casserole of the best potatoes I ever ate in my life. Creamy, hot and unbelievable. Eventually, the four of us pushed aside the steaks and just ate the potatoes because we refused to leave a morsel.

I will try your recipe and perhaps it will bring back happy memories.

the leeks are what will set this apart. i am excited to try. thanks for the recipe!
norah in california
(have same passion for cooking as anne)

Delicious! My wife and daughter loved it too!

Johanns Potato's, oh how I have missed having this receipe to bake! tyvm for posting this yummy traditional potato bake!