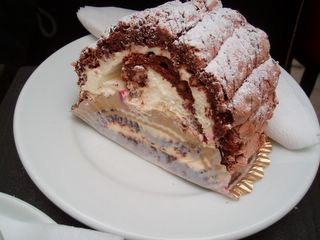 Ilva challenged me! She listed five things she'd dare to make this year that she hasn't previously dared to try. Interesting. Her choices included soufflés - which I made for IMBB. It was surprisingly easy - and I'll try to make some more this year. I think I'll also give Puff Pastry another go - that also went quite well. But what challenges are left for me? Lots, lots, lots. These are the top five I could think of:

1. Budapest Swiss Roll, or Budapest-rulle as it's called here. It's what you see in the picture above - this particular one being flavored with chocolate and filled with raspberries and cream. It's like a swiss roll, which I tried for the first time last year, but harder since it's much more filling, and since the bottom is much crumblier than regular cake. (It's sort of a nut-meringue bottom.) Indeed, I'll try more advanced pastries, in general!

3. Gnocchi. I've eaten ready-made from the store, and I've very happily eaten the ones Lena and Nico makes - but I haven't tried them myself. Lena says they're simple - well, I don't know. I kind of doubt it. So I will try for myself this year. Hopefully with some supervision. As a bonus-promise, I will also make Swedish Kroppkakor (translates nicely into "body-cakes) which are large potato dumplings filled with fried pork, onions and allspice.

4. Real veal stock, per Anthony Bourdain's instructions. I know, I should probably be shot for not having done this already. But where the heck do you get veal bones? I need to work up the courage to ask someone in my local store.. and hope they don't look at me like i'm completely nuts.

5. Last, but not least: Penne alla Vodka. I've read many recipes for this, and I'm always intrigued.. but also intimidated. Vodka? In my pasta? Why? And can it really be good? This year, I'm going to find out.

So, now, tell me all about your five dares for 2006! I'm tagging the following five - but if you're not tagged, and you want to join in - by all means, go for it! This is not invitation only! :)

1. Kevin of Seriously Good
2. Sailu of Sailu's Food
3. Andrew of Spittoon
4. Nic of Bakingsheet
5. Jocelyn of Brownie Points
Posted by Anne at 10:47

Great Anne! I'm looking forward to see your posts about your promises! Believe your friends-gnocchi are easy to make! It all depends on the potatoes!

I really love this blog, it makes me want to give cooking another try every post. ;D
Don't worry about the gnocchi, they're indeed easy to make. As the previous comment said, it's all about the potatoes... and the quantity of flour you use. If you knead in too little, they'll come apart once you toss them in the water to cook them.
The Artusi (an old Italian cookbook, I think every family has one here) says you should use at least 150g of flour for each 400g of mashed potatoes.
I tried that, and I found myself adding some more flour.
Plus, I'd suggest you use some semolina (say, at least 2/3 ap and 1/3 semolina), because it works better when making pasta.
And before I leap back in Lurkdom, my girlfriend tried Penna alla Vodka a couple of years ago and she's hooked now. I guess they're good, then, because she's so damn picky usually. ;)
Keep up with the great work!

As if I didn't already have enough on my plate...

Hej Anne - ever since I tried Penne alla Vodka back in June, I've been cooking it again and again every few weeks. It's delicious and easy and a bit naughty:) And what else would I do with all that vodka in my fridge anyway??

Darnalmonds - oh, thank you! Thanks so much for the gnocchi tips - sounds great! And you and Pille seem to agree about the vodka pasta too - excellent. I really have to try it - soon!

Ilva - this was a really fun theme. I enjoyed it!

Eva - thank you! I'll definitely try one of Jamie's chicken recipes, since I have all of his books the hard thing is choosing. :)

I recommend brining the chicken for 8-12 hours before roasting and liberal use of salt, pepper, and butter on the skin.

Lidia Bastianich (famous chef in US with several Italian restaurants and a cooking show plus several cook books) has great tips for making gnocchi. She even shows her grandsons (small boys still) helping her form them on the show.

Hi Anne!
great challenges, good luck! Now I need to make some research about that Budapest roll, what is it exactly? I've never heard of this. Oh, I'm Hungarian:)
Zsofi

I have the best penne alla vodka recipe ever! E-mail me if you're interested: ivonne@creampuffsinvenice.ca

Hmm, I might take you up on this meme - just have to think about what I want to make this year except cooking fresh fish...
Oh do try to make kroppkakor, it is so fun and very tasty! And they freeze well which is good since all the effort seems a bit much for making small batches... I fry them in a little butter and serve with lingonberry jam.

Zsofi - oh, I'm pretty sure it has nothing to do with Budapest :) It's a rolled cake, with a nut-meringue bottom, and it's generally filled with whipped cream and mandarin orange segments. Very tasty!

Clivia - freeze them? Yeah? Fry them, though? I've always only eaten boiled kroppkakor, with white sauce. Traditions differ, apparently! And there's a huge debate on whether to make them with raw potatoes or boiled, or a mixture.. I'm leaning towards all boiled, as that's what my grandmother did.

Well, when they are fresh of course it is good to eat them as they are! But when they have been frozen, or when you heat up leftover kroppkakor they are a little more "fun" if you fry them. And with a golden brown kroppkaka the lingonberry is excellent! A matter of taste I guess, and traditions. I, or we, always make kroppkakor with boiled potoatoes only. I think the ones with raw potatoes look so grey and dull, plus they are harder to succeed with I have heard (never tried it).

Fair is fair. I've tagged you to tell 10 weird or random things about yourself.

Kevin, that is fair :) Will get around to it! Hah!

Clivia - I have to try that! :) My husband's family stand firmly in the grey kroppkakor camp, but I'm quite sure I want them white :)

Yum, penne alla vodka is one of my favorites. I should try making it this year too. I can never taste the vodka in it, so I don't really know why it's there.