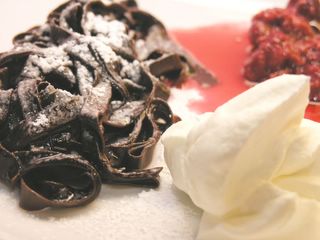 When I told Per I was thinking about making chocolate pasta for Is My Blog Burning, he shook his head and looked at me like I was crazy. I persisted, but when I actually made it - he told me that he had misunderstood. He thought I would be boiling regular pasta, and dipping it in chocolate. Huh. Yeah, I wouldn't have been so thrilled with that idea, either.

However, I figured that this installment of IMBB - Use Your Noodle - would gain mostly savory entries, and I really wanted to try something different. So, dessert it would be, sweet pasta was on the menu, and I was going for chocolate. I got the basic idea from Alexandra Zazzi's cookbook - she's a talented pasta chef, but is probably best known for the fact that she was the second winner (and first female) to win Survivor. Anyway. I tweaked quantities a bit, and made just enough for me and Per. Or so I thought, it turned out to be a bit more than that - it'll probably comfortably feed four. You really just want a little bit - it's very filling. I can think of thousandes of things to serve with it (orange segments in caramel, toasted nuts, coconut maybe, pineapple, fresh strawberries..) but settled on a simple raspberry sauce and lightly sweetened whipped cream. Yum.

Mix dry ingredients in a bowl. Make a well in the middle, and add the egg and the oil. Stir with a wooden spoon until it comes together, then use your hands to make a firm, smooth, elastic dough. Wrap it in plastic and let it rest for at least half an hour.

Then bring out your pasta maker (yeah, it's probably in the very back of some cupboard) and roll it out to desired thickness. Cut into tagliatelle, and boil in UN-salted water for two minutes. Serve immediately!

Chokladpasta
Posted by Anne at 09:20

Hey, what a great (and very different) idea. Must admit that when I saw the title, I was thinking along the same lines as Per!

WOW! Thats perfect for a chokoholic like me. Hmmm....

fantastic entry Anne! I take it you like them? Can't wait to see ravioli made out of this dough!

Bravo Anne! They look so different and equally delicious!

That looks incredible! Who could ever give up pasta especially when it's made of chocolate???

Fascinating! I've never even heard of chocolate noodles. If only I had a pasta maker...

Lovely tagliatelles. You are right, great minds think alike. Funny we had the same idea miles and miles away!! I like your raspberry cream accompaniment! Lovely blog of yours btw! Will come back!

Mcauliflower - liked... yes, at least a bit. I'm not dying to make them again, but it was a nice experiment. It's a pretty heavy dessert, but fun for a special occasion! Ravioli with some kind of nut filling would be awesome!

Jennifer - get one! It's so much fun! :) And even cheap ones are really good.

I read the similar idea at Bea's - you guys must be food projecting! Brilliant take on pasta. I have to try it one day when I have loads of time and no one will bother me! I hope Per ate his words! LOL.

oh! this is truly for a chocohiloic like me. But tell me anne is there any way of making this without the pasta maker. like flattening it with a roll-pin really thin n then cutting with a knife n using it. do tell me .

Rituparna - absolutely, you can roll it with a regular rolling pin, but you better be persistent and strong, it will take a while :) then just fold it several times and cut into thin strips. Good luck!

Hi Anne, I tried this by folding it several times and cutting into thin strips. In short was not comfortable with the roll-pin. Can you guide by elaborating that part?

Hi! I think it'll be really hard to roll it out by hand - I really think you need a pasta maker. I've only made it that way (and only once) so I can't really say a whole lot more! :)

What flour did you use?? eg. self raising flour or plain flour..? it looks great by the way :)