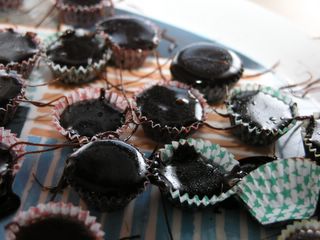 Things don't always work out as planned. I'm not perfect. I make mistakes, just like everyone else. And I recently had a major kitchen disaster - the worst since my horrendous experience with the chocolate-plastic-wrap-uncooked-spaghetti-cake. (And no, I haven't made it again. I doubt I ever will. The very thought makes me cringe.)

Making candy is a big part of the holiday preparations for many Swedes. In particular, toffee is big. Almond Cream Toffee - "knäck" (named for the sound your teeth will make as they crack..) is a real staple. I had gotten a couple of new recipes from an online forum, so I thought I'd try them out. While at it, I figured I'd go ahead and make four types at once. Hybris? You could say that again.

All four kinds ended in disaster. I thought I was so well prepared, but when three kinds of toffee were done at the exact same moment, I had to realise I was defeated. There was just no way I could handle it. One toffee burned, another got hard as a rock. My fudge turned.. oh, into toffee, kind of (at least that's edible) and my tried and true Almond Cream Toffee boiled over in the microwave and made a complete mess.

I'd love to share the recipes, but I have to try them again first. And I feel quite traumatized right now. I'll get back to you. The only thing which keeps me going right now is Lena's kind words: "Extreme disasters are meant to be forgotten."

If you want to read about more successful candy-making, head over to A Cat In The Kitchen who posts about it here and here.
Posted by Anne at 14:24

I'm sorry to hear about your problems, don't beat yourself up over it. Shit happens. I'm sure you learned one or two things from this :)

hey,its just one of those day anne.Dont be hard on yourself.I keep having disasters in my kitchen all the time...big deal..:)

I just had my first toffee making disaster and it's good to know that I'm not the only one! Sorry it happended to you, hope I can help.

I've made it several times in the past with no problems and used the same simple ingredients and technique that I always used. But today the butter completely separated from the candy, and it looked terrible and I couldn't fix it! Ended up with burnt sugar with a layer of clarified butter on top.

After looking for remedies online I remembered that I had this same problem years ago and used the solution that I just found (too late).

I live in a usually dry climate (San Diego CA), but today it is very humid - and that seems to be a factor in candy making.

Anyway, in the future if you run into this problem (seems to be common), try the following -

slowly add a little water and stir(two teaspoons at a time, up to three tablespoons). During this process the ingredients should start blending again.

Use a good saucepan and wooden spoon.
Stir butter and sugar constantly over medium-low/low heat (it takes a while but it's worth the wait and won't burn).

After the frothy stage the mixture will start to become smooth. Wait until it becomes a butterscotch color. At this point start using the cold water candy test. You want the Hard-Crack stage 300-310 degrees. The threads will be medium brown and brittle. Before this stage the threads are somewhat flexible - you don't want this. [at this point if the sugar is clumping and the butter is separating start adding a little water).

I usually make two pans - one recipe each, one plain and one with nuts (we prefer chopped pecans).

Pour the hot mixture onto a lipped cookie sheet (I line mine with parchment paper - but not needed). If making English Toffee add about 1/2 c. chopped pecans to mixture before pouring.

Place or sprinkle chocolate on top. After a few minutes smooth with a spatula. Garnish with chopped pecans.

Nice to meet you, and I enjoyed your site. Hope this toffee info may be of help to you.