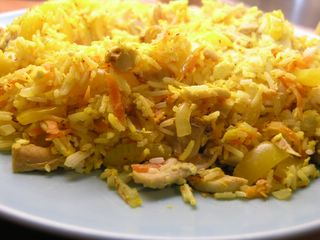 I do love food blogging events, like Is My Blog Burning, Sugar High Fridays, Blog Party and all the other fun stuff people come up with. One of the most challenging is Paper Chef. I rarely participate, since it's so hard - but I feel up to it today. Owen at Tomatilla started this event, and the rules are quite simple. The inspiration, of course, comes from the TV-show "Iron Chef" where chefs compete to make the most out of special ingredients. This is the same idea. Every month, people can nominate ingredients. Four will eventually be chosen and then it's up to us bloggers to think of something to make!

This month's host is Noodle Cook, who won last month's event with this cool recipe. The ingredients this month are rice, carrots, anchovy and.. something from the other side of the world. Huh. Some are taking this very literally - but I won't. Did you know about this cool webpage where you can see your exact opposite place in the world? Well, my opposite is right out in the ocean. And I don't feel like cooking fish today. So, I interpret "other side of the world" loosely. And to make up for that, I'm using two "faraway" ingredients.. sort of. One is really from quite far away - saffron, from India. My other "super ingredient" is leftover Thanksgiving turkey. (Yes, it's definitely on its last leg.) Ok, the actual turkey was raised right here in Sweden, about an hour from where I live - but the idea of eating turkey, and to be exact, a Thanksgiving Turkey.. well, that's from the USA. Which is pretty far from me. (Let's hope the judges buy it.)

I know "leftovers" and "feast" rarely co-incides but in this case, I must say that this is a dish I'd be proud to serve to company. It's very tasty, and very comforting. Just the thing on a cold winter's night...

Heat the butter in a large skillet. Add the onion, anchovy and carrot, and fry gently for a couple of minutes. The anchovy should melt. Add the yellow pepper, and rice. Fry for a little while, and add the turkey. Push everything to one side, and gently scramble the eggs in the same pan. Stir together with everything else, and add the saffron. Season with a little bit of cayenne pepper for a little bit of heat.

I tried to drizzle over a little real Canadian Maple Syrup to appease Judge John. (Not sure what he thinks about that - but hey, I tried.) Real maple syrup is, incidentally, one of my favorite things. Did it work here? Not so much, no. Per put soy sauce and sweet chili sauce on his and was happy; I liked it in the nude.

What to drink with this? The judges say that they'd like to hear more about beer, so I'm sorry to admit that we don't have any in the house at the moment. However, it's December.. so it's time for the Swedish drink Julmust. This is a seasonal soda, only sold around christmas. (And oddly, Easter. Except then it's re-labeled as Påskmusk.) Deee-lish. (And, as a little advice, this is perfect with lots of ice, and I'm sure it'll be pretty nice even in 45-degrees-Celsius-weather. Not that I'd know. I live in Sweden, remember?)

Noodle Cook asks for a little more than a recipe this time. So, here's some stuff about nomination..

To help the judges decide, I'm nominating myself Finalist for Paper Chef Super Saver. A very clever use of leftover turkey combined with the given recipes, given a golden touch by the wonderful christmas-y saffron. But I could also have nominated this for the "Nutrition Genius" category, as it's pretty healthy. Very low-fat! And hey, of course I'd like to win the "Paper Chef Personality". Sure. Please? I don't think I stand much of a chance for "Prestige" or "Supreme". (But a surprise would be fine, oh yeah.)

As for gifts... gee, I'd like anything. If I had a choice.. I think I'd prefer the bush spice sampler, but everything sounds really fun so it's not a very strong preference. It's been real fun to take part in this event, so I'm really just excited about that. :)
Posted by Anne at 19:12

Hi Anne, you're taking "fried rice" to a whole new level. Usually its long grain rice with mixed vegetables (corn, peas and carrots) and a good smidgen of soy sauce or oyster sauce.

I came upon your blog by searching for the answer to the question: “what is the difference between a cupcake and a muffin?” The search lead me to IMBB #13 - Raspberry-Marzipan Muffins. Your photo of the muffins (or cupcakes?) was irrisistable. I was hooked! I haven’t made the muffins yet, but surely will. And now I look forward to more of your posts.

Hi Anne - your Fried Rice with Turkey and Saffron looks yummy and the colour is beautiful. I think maple syrup tastes good on almost everything!

Hi Anne,
I am happy to see that someone else interpreted the other side of the world loosely--no mapping for me either! I love the idea of dressing up leftover turkey with saffron; your dish sounds simple and delicious, just the kind of food I love.

Such a lovely colour which adds a festive touch to the dish! Saffron the judge from thefoodpalate.com loves saffron! I found out that Christmas Julmust soda is a better seller than Coke! Hope I get a chance to try it. Thanks for contributing to the fun of Paper Chef.

Hi Anne,
I just whipped together a batch of this for lunch -- one of those instances where I googled what was in the fridge and got lucky. It's fabulous, and only took a few minutes. Thank you for adding this creative new turkey dish to my post-Thanksgiving repertoire!