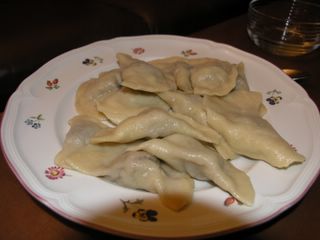 Today I’m going to tell you about my favorite dish in the whole world. It’s a long story. And there are very many pictures, so I'll just do links for most of them rather than full shots. They all feature my parents, working hard to feed their demanding daugther.)

Pelmeenid, or “Belmener” as we have always said, is something I grew up with. My grandfather Aleksander (he’s always called “Grandfather Aleksander”, never just “grandfather”) always made it, so my father and his brother and sister grew up with it too, and then my dad has taken over the tradition of making it. We never did it very often – once or twice a year when I was a kid. It’s fairly tedious, and takes a lot of effort. But it’s very much worth it. Everyone who’s tried it loves it – with one notable exception. Per. (Ah, and yet I married him…)

So – what is it then? It’s really simple. Basically, it’s just meat-filled ravioli. “Ah, Italian!” you might think. No. My dad’s family is from Estonia, and this is an Estonian or possibly Russian dish. I’ve never encountered anyone outside my family who knows it, or at least not like we do it – but as far as I know, it’s a dish my grandfather Aleksander learned when he was young, growing up in Estonia and later on working in Russia. My dad always claimed that the dish was Finnish, I think – that it was invented during one of the many long wars between Russia and Finland. The Finns, in his version, were starving and started cutting the ears off captured Russiand – and ate them. Eventually, they ran out of Russians, but the acquired taste for ears led them to this dish. Because the Pelmeenid do look a bit like ears. I loved this story as a kid. And my dad loved telling all the gruesome details.

I don’t expect anyone to try this on their own – it’s a fairly long process, and I think it’d be a bit hard to get them right without knowing what they should be like – but I’ll describe it anyway. This is how we make Pelmeenid in my family.

First, you make the dough. Use two eggs, 400 ml of cold water, plenty of salt, and as much flour as the dough can hold. It should be very stiff, and not sticky at all. I use my Kitchen-Aid. And meanwhile, flour a table for the finished Pelmeeni to be put upon.

For the filling, you need about 500 g of freshly ground meat. It should be coarsely ground, NOT finely ground. And if possible, grind it yourself or ask the store to grind it for you. Make sure to use really good beef. This will very much affect the outcome. Add a medium yellow onion, very finely diced, and plenty of salt and black pepper. Loosen the filling with a little bit of water. It shouldn’t be runny, but a little bit soft. If it’s too stiff, or too finely ground for that matter, it’ll turn to hard lumps inside the Pelmeenid. Not what we want.

So. Make the filling, and set aside. Make the dough, kneading it very well, and let it rest under a dish towel for ten minutes. Then, divide the dough into four parts. Make each part into a long rope, and cut into finger-wide little pillows. Work on a floured surface at all times! The pasta must NOT stick. A torn Pelmeeni is a dead Pelmeeni.

Make a thumbprint into the pillows, so they’re a little flatter. Put on a floured surface, cover with more flour and a towel. When all the pillows are flattened, it’s time for the rolling. Take one pillow at a time, and, working with the edges only, shape it into a palm-sized round. It’s important to not make the center too thin, or the Pelmeeni will break. Put the rounds on a table (actually, NOT a floured one) and leave it for the fillers.

The fillers will take one round at a time, preferably about five minutes after it has been rolled, flip it onto their palm (it’s important to flip) and put about a teaspoon of filling into it. Then, fold it double and pinch the edges together firmly. No leaks!

Put the finished Pelmeeni on a floured surface, cover with more flour, and a towel to make sure they don’t dry out.

Put on your very largest pot of salted water. Boil the Pelmeenid for about 3-4 minutes. Fish them out with a large slotted spoon. Serve immediately.

Now for the clincher. You eat these with “ättika” which I think translates into white distilled vinegar. Dilute it with water, and pour into little bowls, one for each diner. When you eat, dip the Pelmeeni in the vinegar, and promptly shove it into your mouth. Yeah, the whole thing. The sensation when you bite into the Pelmeeni and your mouth overflows with the meaty juices... oh, pure heaven.

I am a bit of a heathen, and also put ketchup on my Pelmeenid. My dad shudders. But I like it best this way.

This recipe makes about 100 Pelmeenid. That will comfortably feed 5-6 people. I generally eat a little less than 20 in a sitting - and that fills me up completely. Any leftover Pelmeenid can be frozen, in a single layer and with plenty of flour. Use within the next couple of days though. And frozen Pelmeenid are more prone to breakage.
Posted by Anne at 08:44

Hi Anne - this is so exciting! First of all - I have been reading your post for a while, but had no idea that your granddad was from Estonia! (So am I, though I have been based in Edinburgh for the last 5 years, which almost makes me part of the Estonian diaspora by now:)
And pelmeenid (that's plural for 'pelmeen' in Estonia) are indeed originally from the Russian kitchen, but they're very popular in Estonia and come in many different varieties.
I love them to bits - in Estonia we usually eat them with sour cream and chopped green onions, though you can get them deep-fried in some pubs. I've never made them at home, as it is quite a task (which doesn't mean that I won't make them in the future).
However, I have this wonderful Russian friend in Edinburgh, and she makes most beautiful and tasty pelmeenid, and we've been thinking of having a pelmeen-making session soon. If we do, we can compare notes afterwards:)
I'm going home for holidays in 10 days and I know for sure that my mum has already a packet of readymade pelmeenid waiting for me in the freezer..
Thanks for a lovely post!

Hi Pille! Oooh, I'm so excited to hear from you! And I'm immediately adding your blog to my daily read. SO nice to hear from an Estonian, and I hope you post some Estonian recipes. It'd be great to surprise my dad!

You've got to tell me what brands of ready-made Pelmeenid to get! At least my dad goes to Estonia quite a bit and my aunt and uncle have an apartment in Tallinn.

I look forward to hearing about your Pelmeenid-making experience - I know nothing but how we've always made them at home! :)

What a great story! I love that Dahlesque touch of scaring the kids!

Wow. It sounds like alot of love goes into this dish, It reminds me alot of Perogies but beefier

I adore pelmeni! Congratulations on your new cute design.

so nice to find a recipe for pelmeenid!

I'm from Estonia as well but now living in UK, and of course noone here has heard of pelmeen hehe... and i miss them, they are so good! i used to eat them deep fried and dip them into sour cream with chive.. yum!

so thanx for sharing, i will definately try to make them and surprise my boyfriend - who is english and will probably pull faces at them :D

I just wanted to mention that this has been my favorite pelmeni entry for years. Every time I write about childhood foods or what was the only fast food back then, I come back here to share your entry with my correspondents/readers!

This sounds like Japanese potstickers, I buy them at the supermarket! I love them, so yummy!

Hi! My name is Kaire, Im estonian living in finland. Pelmeenid has been my favourite dish for a long time now. It´s true that you can by them at the supermarket in Estonia, as well at some bigger markets here in Finland. And at the Estonian food-shops in Helsinki! You can find them in freezers. I also put them in to the vegetable soup sometimes :P

BTW! I really do not know any finnish who eats or even knows that pelmeenid is. And the dish came to estonia with russians I think.Not sure about this tho :P

Just got back from Eesti 2 weeks ago and love Pelmeenid too. Their so amazing simply fried up. You should try it. Head isu!

So this is just Pierogi to the rest of the world...?

Anonymous: I don't know, is it? In poland, yes. Polish pierogi is definitely similar. Swedish or Finnish piroger, are not. The dough is bread-like, rather than pasta-like, and the fillings are usually quite different too.