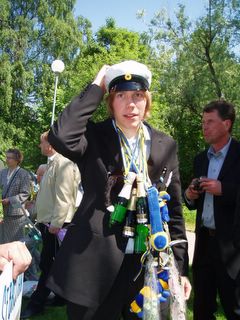 We recently visited Per's family, in the city of Motala. It's about two hours from Stockholm, where we live. The occasion was his little brother's graduation from high school - "studenten" as it is called here. Sebastian is 19, and was celebrated with lots of champagne and great food. Swedish graduations differ quite a bit from a US high school graduation (I know, since I've done both) and are a lot less formal. There is no ceremony - at least not open to the families. The students, after having had a ceremony themselves, run out into the schoolyard, toss their white hats in the air, and are recieved by their families. The families generally shower their students with flowers, little toys with student hats, and small bottles of champagne. They then gather, in their respective classes, to go on a glory-ride around the town, on big decorated trucks. (This is the perfect time to drink all those tiny bottles of champagne, by the way.) After that, most students have a reception at their houses, and are brought there in a nicely decorated car. (Well, this all differs a little from school to school, but it's a fairly common way to do it.) 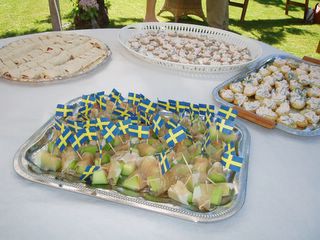 The reception was held at Per's aunts house, and the food was yummy. First, we had strawberries and champagne, and little bites of melon and parma ham. In the background, there's small crostini with Skagen salad, which I'll have to make and post about some day. It's mainly shrimps, roe, dill and mayonnaise. Oh, and the rollups with soft rye bread, horse meat and horseradish.

Then followed a buffet with all kinds of goodies, my favorite being the Vasterbotten Cheese pie served with roe, chopped red onions and sour cream. There was also cold, marinated pork tenderloin and chicken breast, and several salads. And more pies, but I was getting stuffed at this point. I had to leave a little space for some wonderfully soft brie cheese, and then there was coffee and jam roly-poly. Roly-poly is a fun dessert, and one I really want to learn how to master. It's very intimidating, rolling up a big cake like that, but I'll have to try one day. Per claims that it's a breeze, so I'm thinking that *he* should do it. 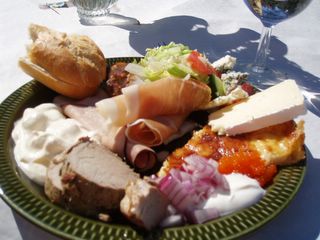