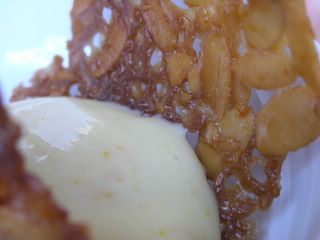 It's that meme-time of the month again! And I'm not late - I am indeed early. And I have to be, because in a few short hours, I'll be on a plane to Paris. We're going there over the weekend, to celebrate my birthday. I'm *so* excited - it'll be great. I've only been to Paris once, on a very short trip. I was fifteen, and on my way to a language school in England. We went by bus, and stayed in Paris for.. I think two days. Per has never been there at all. We plan to look at as much as possible, and eat as much as we possibly can. Of course.

So. I had to post this a bit early - and my IMBB on Sunday will probably be posted a bit late, on Monday morning. This months theme is "Pucker up with citrus!" and it's hosted by Alice of My Adventures in the Breadbox. (I love that name.) I wanted to make something fairly different, and I was having my parents over for an early birthday celebration dinner. I leafed through my (numerous) cookbooks, and finally something caught my eye. It's from Mattias Dahlgrens cookbook - he's a celebrated Swedish chef, very innovative. It was called Citrus Tacos, and was a tuile-type cookie filled with a citrus cream. I decided to do more of a florentine cookie, but stick with the cream. Both components were quick and easy to make - although the cream made me a bit nervous, as I had a weird idea that it might split. (It never did though.) And it was my first time around this type of cream - which is basically just a custard, I believe.

Preheat the oven to 200 degrees C. Melt the butter in a saucepan with the sugar, honey, almonds and oranges. When the butter is melted, add the milk and the flour, stir well and let simmer for a minute or two. Make into thin shapes on silpat or teflon sheets, and remember that they will spread a LOT. (But no worries, you can always cut them apart later.) Bake for 4-5 minutes, until desired goldenness appears. While warm, shape over a bottle if you want a taco-type shape. (Or don't bother.)

Use a free-standing mixer if you've got one. Whisk the yolks with the sugar and cornstarch until thick and fluffy. Heat the milk in a LARGE pot, and when it's hot, pour over the yolks, while still whisking vigorously. Add the mixture back into the pot, and keep on whisking. Bring to a boil, and stir all the time until it's thickened. Pour back into the bowl of the mixer, and mix on high speed until it's cooled down. You can also fill your sink with cold water, and whisk while the bowl is partly submerged, this will cool it down more slowly. When it's cool, add the citrus peel, and either divide into small pots, or pipe into the taco shells or on pieces of cookie.
Posted by Anne at 21:10

this sounds lovely. looks like very summery-dessert. somehow i associate custards with summer...anyway have fun in paris and happy birthday!

Wow, what a cool idea! Sounds like it tastes really good, too. Hope you have a great time in Paris!!

What a great sounding, light dessert - perfect for spring and perfect for this edition of SHF.

Have a great birthday weekend in Paris...I'm so jealous!

I agree! Light and perfect for spring. I love the presentation, Anne.

The dessert looks beautiful! I hope that you had a great birthday and a wonderful time in Paris!

What a creative entry. I have never heard of citrus tacos! What a great dessert for a themed party!

Tanvi - it's my first time with custards, but I'll definitely experiment now. It was so easy!

Alice, Jennifer & Dagmar - I had an awesome time in Paris! It was so much fun!

Now I'm off to read all the other entries - this was a really fun theme!

Hi Anne,
I think I like your cookie shell better. I think I'll try this next time.