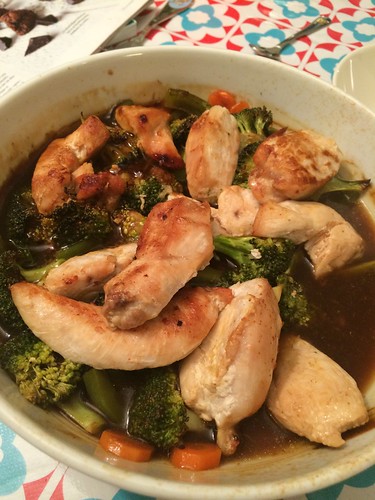 Well, I'll just come out and say it. I barely cook anymore. Certainly nothing new. Or from scratch. Or well, that's what it feels like. This is about the only just barely blogworthy thing I've cooked for ages, and even then.. well.

This uses shortcuts. But I prefer to think of it as a way to spruce up a store-bought teriyaki sauce which in itself can be a little boring. So what I did was take a bunch of veggies, grate lots of ginger on top, place some seared chicken on top of that, and then pour over the sauce. I baked the whole thing for fifteen minutes, made some rice, and voila! Dinner.

Teriyaki Chicken with veggies
enough for two adults & two kids who really don't eat much
(because that's my life...)

Place all the veggies in an oven-proof dish. Add grated ginger and toss.

Cut the chicken into strips, and lightly sear in butter or oil. Place on top of the veggies. Pour on the teriyaki sauce and water if you feel that the sauce by itself is a little too salty. (Mine was.)

I think we all go through times like that--besides you have a very busy life with a young family and work too! Anyway, I LOVE teriyaki chicken:) I have a store bought sauce I really like but I wonder if perhaps a bit of fresh ginger would add to it. I'll have to find out.
Blessings,
Aimee