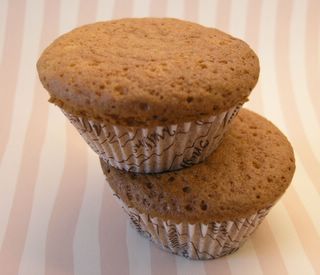 This is a recipe I tried because of my co-worked, Tobias. Tobias doesn't cook. Or bake. He's the king of ready-made food. But he's learning, slowly, to eat better and to cook more. And he wanted to bake muffins. I directed him to Dagens Muffin, a great sit - in Swedish - with tons of muffin recipes. He fell for a recipe called Pia's Caramel Muffins, and so he tried to bake them. With disastrous results. The muffins rose way too much, and he ended up with an entire pan of muffins. He ate them with a spoon. Not deterred, he tried the same recipe, again, next weekend. With, sadly, the same results. He used less batter in the cups, but they still swelled and ran over. Again, he had to resort to eating them with a spoon.

So. As any good co-worked would, I offered to try the recipe myself. He agreed that it was a good idea, feeling pretty confident that I, too, would fail. However.. I didn't. I thought that maybe the recipe had too much baking powder, or that he had over-beaten the eggs, but as I used just as much baking powder, and beat my eggs vigourously, I don't think that was the problem. Bad baking karma, perhaps?

Anyway. The muffins are really tasty. "Hey, but where's the caramel?" you might ask. Good question. The caramel name comes from using the golden syrup, which definitely imparts a great caramel flavor. Next time, I think I'll try these with maple syrup - that would probably make them even more special. And they'd be fine with some kind of topping too, maybe caramelized hazelnuts?

Beat eggs and sugar until fluffy. Melt the butter. Mix flour, vanilla sugar and baking powder in a separate bowl, and add to the egg-sugar-mix. Add the melted butter and the syrup.

Pias Kolamuffins
Posted by Anne at 08:41

i love your muffinliners!!! they look so 'cafe/stylish'... really cool

Anne, brown sugar instead of white, will put more molasses in the muffins, therefore more caramel flavour. Try sprinkling white or raw sugar on top before baking. This gives a slightly crunchy crust. I like to add fruit, especially bananas that are over-ripe, in my "Sunday morning" muffins so they are healthier for my family.

Yummy idea and I just picked up some golden syrup. Cheers!

Wow! This is a great recipe! Thank you for sharing

hi there....please help...just used your recipe and my muffins have gone terribly wrong....they have all sunk in the oven and need to know what i have done wrong...i think i followed your recipe to the letter...but u never know....
young girl in need of serious help as I neeed to make these muffins...they sound too good to ignore!!!!

Anonymous - I'm so sorry to hear this! I had no problems with it, but like I said in the post, Tobias sure did. Hope you manage to figure out what went wrong - possibly too hot, or too humid?

what kind of flour is better???

I use regular white flour.

What is better, use fan forced oven or not for muffins?
Thanks and can't wait to try these muffins!

Fai, I'm generally using my convection oven, but a regular oven will be fine as well. You just have to watch the muffins to make sure they're ready and not under- or overbaked.

Thanks Anne, I will try this out. My step daughter loves caramel muffins. I have only made Choc/banana/blueberries/orange-poppy muffins. This will add to my muffins collection!

Yummy, made these tonight. I used a mixture of Maple and Golden syrups and some caramel ice cream topping for my flavour. I also used half caster and brown sugar.

Thanks for this one!

great idea about the brown sugar and extra molasses.... I love the recipe tho!!