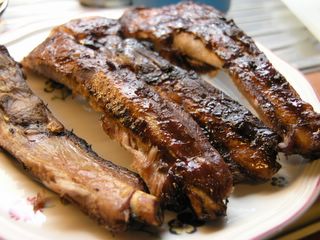 I tried ribs a while ago, as some of my might remember. I also asked for YOUR best ribs recipes - and the other night, I tried one of them. It was decidedly better than my first effort but still not quite what I wanted. Maybe ribs just aren't for me? Anyway, I followed Phillyiukgirl's instructions - I (or Per, really) brought the ribs to a boil and let them rest (this part, by the way, was great. They were SO tender!) in the water. We smashed lots of garlic, and rubbed garlic and brown sugar all over the ribs. We poured over soy sauce - and in an inspired moment, some whiskey. But.. it didn't turn into the sticky glaze we had imagined, but instead burned on impact with the baking pan making a large sticky black mess underneath the ribs. The ribs themselves were beautiful, but I would have wanted more "sauce".

I still have one more set of ribs in the freezer, and I plan on making Scott's dry rub for those.
Posted by Anne at 08:16

Anne, if you like you can try this ribs recipe: http://canard.typepad.com/oslo_foodie/2005/01/trond_mois_spar.html
Plenty of sauce ;).

Hmm, my earlier post did not put the whole link I was putting. I'll try again to write the whole link here:
http://canard.typepad.com/oslo_foodie/2005/01/trond_mois_spar.html

Why why why did I go to your page today :-) It ended up with me promising making ribs to Fredrik, as he love them, escpecially with honey :-) But on the other hand he has promised to make me a vegetarian dish today, which ever I want :-)

Hi Anne ... you might try these ribs at Kitchen Parade, they're definitely of the glazey sort. I had trouble with ribs, too, this is now my own standard, this is the recipe I go back to now. Enjoy Alanna http://kitchen-parade.blogspot.com/2005/07/berry-baby-backs.html

I'm so sorry they burned!! This is the problem with things you've seen your mom do without a recipe, then doing them yourself in a fairly close semblance--it turns into Chinese Whispers, with something vital slipping through the cracks! I'm so pleased the boiling thing worked, though. I'm going to try oslofoodie's tonight.

Incidentally, I'm not a blogger but I'm a cat lover--we just picked up our third Maine Coon cat this weekend, and are getting a 4th MC kitten in two weeks. Love of cats seems a perfect (purrfect? Sorry!!) pairing with love of food--my favorite kind of people!

Oslofoodie & ak - thanks! I'll definitely try them in my search for ribs perfection!

Dagmar - hope me made you something REALLY yummy :)

Phillyukgirl - oh, I'm still so pleased I did try! The ribs were fine, I just wish the sauce hadn't pooled into blackness in the bottom of the pan :) Best of luck on your new cats! I love coonies, they're so beautiful!

oh well, the best ribs in (london) town are to be had at my favourite restaurant: Salt Yard in Goodge street. They are melt-in-the-mouth and marinated in a sherry-honey concoction that is without par, finger-lickingly good!