The Itchy and Scratchy show is back in town 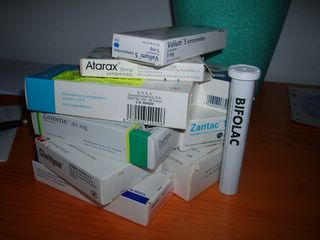 Yes - I'm back. (Uh-huh, I'm both Itchy AND Scratchy. Like you would NOT believe.) Behold the mountain of medications that have made up a large part of my daily eats on this vacation.. To make a very long story short, the cat bite quickly healed, but I got a serious allergic reaction to the antibiotics. So I've been itching, like crazy. I've had had to see several Spanish doctors, each providing me with more pills, and several cortison injections. (The latest one even subscribed Valium, to help me get some sleep.)And the itch still won't go away! I'm slowly going insane. It's finally a bit better, at least, so I hope to be rid of it - and the meds - shortly.

Ok, enough of this pity party. Obviously I'm not going to call this my greatest vacation ever, no, but its still been great. We've stayed in a small, sleepy beachtown called Torre de la Horadada, where my parents conveniently enough bought a house a couple of years ago. It's been beautifully warm and sunny, and the water has been great for baths. (And yes, salt water was a bit soothing, thankfully.) 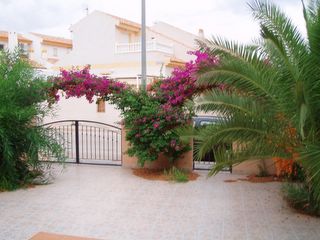 The food - oh, the food... Spain seems to have so much fresher produce than Sweden, although of a smaller vriety. Not awfully surprising - the climate is a lot better for growing, so most things in the store seemed to be at least somewhat local. We really enjoyed going to the markets and buying fruit and vegetables, and most nights, dinner was finger-food - jamón serrano (salty, flavorful, chewy ham), queso manchego (delicious, nutty cheese), pepinillos (tiny little gherkins), olives, sausage (I don't ever really manage to find out what this kind is really called, but it's mild, chewy, and made from pork) and one of my favorite discoveries - croquetas. Breaded and fried, filled with a thick white cheese sauce and pieces of ham - I have no clue how to make this, but if anyone out there does know - tell me! 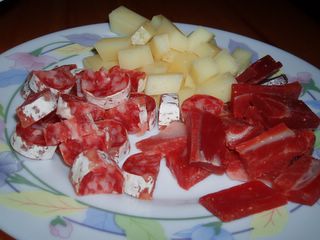 We also ate out a couple of times, but more on thar in the next few days. A huge thanks to Lena who again has proven to be a wonderful blogsitter.
Posted by Anne at 09:38