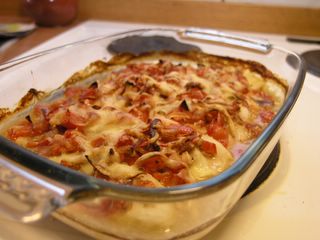 I don't cook much fish. I always intend to do it more, but somehow, it rarely happens. But, as I got last month's issue of Allt Om Mat (All About Food) a fish recipe jumped out at me and demanded to be cooked. It was a recipe for Hoki - a fish from New Zealand that's becoming popular here now that you can't get cod much anymore. They're very similar in texture and flavor, but you can only get frozen hoki here since it's imported from so far away. This dish was really tasty - it was very fresh and flavorful, and I will definitely make it again. Healthy, too - which is a big bonus. (Although, after an extra-tough spinning class, I'm finishing my evening with Ben & Jerry)

I altered two things from the original recipe - they used yellow tomatoes, I used red. And I added the red onion, and used less oil than they suggested. (In fact, I altered the dressing a bit as far as quantities goes. And next time, I'll probably omit the chili - it really didn't add much flavor here. Anyway - here's what I cooked: 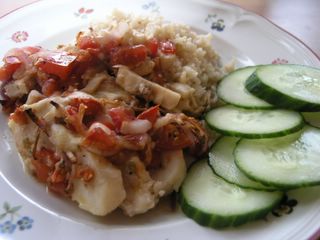 Preheat the oven to 225 degrees C. (450F) Pour some olive oil in an oven-proof dish, slice the hoki and place them in the dish. Add salt and pepper if you'd like. Make the topping - mix tomatoes, chili, onion, oil, vinegar, sugar and oregano. Add salt if you want to. Put this mixture on top of the fish. Finish with a little grated cheese. Bake for 20 minutes. Meanwhile, make rice or potatoes to serve with it - we had a whole-grain rice which was a very tasty companion.
Posted by Anne at 10:03

Very good recipe! We tried it yesterday. The Hoki from Sainsbury's on the other hand wasn't that impressive...

I made this recipe this evening for Mother's Day. It turned out really amazing! loved the cheese and tomato taste, and the fish is not fishy at all! my husband who hates seafood loved this so much. served it with roasted veggies (carrots, potatoes, eggplant, capsicum, onion and pumpkin) sprayed with a bit of olive oil, salt and mix herbs.

but it was slightly overcooked at 20min, despite lowering the temp to 200 degrees of my fan assisted oven. Will be trying this again soon for 15min or so...

highly recommended. thanks for sharing!

Hi, I made this recipe a couple of times and it's so easy and hubby loved it. I'm from NZ so we get the fresh hoki fillets here, but out of all the recipes I could find, this is really the easiest and tastiest :)
Thanks