The dough that wouldn't sleep 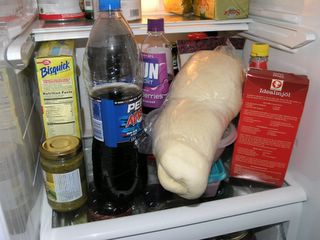 I'm in the process of making my creation for the next installment of Sugar High Fridays. I won't go into details now since that'll be a post for next Friday, but I have to tell you about my dough-making experiment from last night. My recipe called for the dough to be assembled last night, and after two hours of proving, it was going to rest over night in the fridge. Fine. So, I assembled it (ridiculously easy with my Kitchen Aid) - and it was a wonderful dough to work with. I let it prove for two hours, during which it doubled in size and was soft and pillowy. Just beautiful!

After that, it was time to punch it down and put it in the fridge. The recipe stated that you might need to check on it so it didn't rise wild, and if so, punch it down again. I put my air-less, punched-out dough wrapped in plastic in the fridge and sat down to watch a movie. (Collateral - not great, but not bad either.) An hour later, I went to check to see that my little dough was resting properly. When I opened the refridgerator door, the dough lunged for me. It was wild, allright. And rising. A lot. I removed it with some difficulty and punched it all flat again. I thought about reading it a bedtime story, and firmly set it back in the fridge.

After another hour, and the movie had finished, I thought I'd better check on it again. Just in case. I was a little bit afraid to do so, so Per had to come with me. The dough attacked him too! Still wild! Still rising! Still very, very much not resting. This time, he handled the punching. I mumbled a lullaby. Back in the fridge, and then bedtime for me. This morning when I opened the fridge, I was greeted by what you see in the picture above. Wild! Wild!

Oh well. We'll see how the final results turn out - if nothing else, it's been pretty exciting so far!
Posted by Anne at 08:46

I will _not_ do my own dough for SHF, especially after reading this :-) I hope your masterpiece will turn out well though, myself I will use frozen dough bought in the food store. I will have a Swedish theme on the pastries, I just don't know when to do them. But I did managed to do my paper chef entry yesterday.

haha.. that is funny.. attack from the dough-boy... did you ever the the dough from those circulating 'friendship-bread' thing? i kept growing like yours, but it turned out yummy! sounds like yours will be very yummy as well..