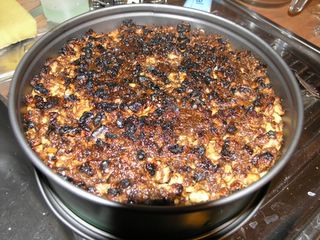 When Zarah-Maria announced that she'd be hosting the third edition of Sugar High Fridays, I was thrilled! The theme was very exciting - spices! She offered us three different possibilities - nutmeg, allspice or cardamom. Cardamom is one of my fave flavors, so naturally, that's what I'm going for.

However, I'm cheating. Yeah, that's what it feels like anyway. I'm sharing two recipes with you today, but I can't really tell you how either one tastes. The first one is a strawberry cardamom liquer, that I made towards the end of the summer. It's actually ready to drink now, but I haven't had time for a tasting yet. I think I might save it until the night before christmas.. and savour it.

Layer the berries, sugar and cardamom into a jar big enough to hold all the ingredients. Mine was actually too small, so I had to add more vodka afterwards. (However, make sure you can get MOST of the vodka in, as if you don't, you might have a yeast problem.) Pour the vodka over everything, and seal the jar tightly. Let sit in the sunlight for six weeks, giving it a gentle shake every now and then. After that, decant into a bottle, and let rest for a couple of months. You can taste it every now and then to make sure it's the way you want it to be. The flavour will deepen as it stands. You can use a little less cardamom if you want to - I'm using quite a lot in this one.

My second offering is a cardamom-cinnamon-walnut cheesecake, that I made today. I can't tell you how it tastes, as I'm bringing it to a christmas gathering tomorrow - but it sure looks good! (I'll tell you how it tasted on Sunday.) I'm basing the cheesecake on Nigella's London Cheesecake recipe, simply because it's a nice, reliable cheesecake recipe. Or at least I hope so - it's gotten good reviews over at Nigella's Kitchen, and I've always had good results with her other recipes. I did try the Chocolate-Lime cheesecake in Nigella Bites a couple of months ago, and so should you. It's great. The topping is from a recipe by Jennifer Flanagan, posted on Nigella's Kitchen- I didn't trust the rest of the recipe though.

Instructions:
Process the cookies in a food processor until they are crumbs. Add the butter, process briefly again. Press the sandy mixture into a 8 or 9-inch springform pan. Put the pan in the fridge and heat the oven to 180 degrees centigrade (or 350 F).

Beat the cream cheese gently until it's smooth, then add the sugar. Beat in the eggs and egg yolks, then finally the vanilla and the spices. Put the kettle on. Line the outside of the chilled pan with strong foil - at least twice, this is scary. Put it all in a large roasting pan, and pour in hot water from the kettle. (In the roasting pan, AROUND the cake pan. Just clarifying.) It should come about halfway up. Put it into the oven and cook for 50 minutes. It should be fairly set at this point, but a little wobbly is ok. Don't worry if you got cracks - they will be conveniently covered by the topping anyway. Take it out, and out of the roasting pan. Put on the broiler (grill, as we call it in Sweden - those hot things in the roof of your oven should heat up and become red). (Or, I bet, you could use a little gas burner, like you do for Creme Brulee.)

Prepare the topping by mixing all the ingredients together until you have a coarse sandy rubble. Put this on top of your hot cheesecake, and put it on a rack near the top of your oven. Leave it for a minute or two - NO more. The topping should come blisteringly together, but it shouldn't burn. (As mine did. Of course. Sigh. Hopefully it'll taste fine anyway.)
Posted by Anne at 14:02

Annoying to have the top burned, that always happen to me as well. I'm sure the taste was great anyways - let us know! The liquer sounds intriguing too, I imagine strawberries would marry well with cardamom... I need to know about this one too!:-)

Thanks for participating with TWO recipes!
Zarah

Anne - both your contributions sound wonderful. I'm sure you'll find they're both delicious!

Cardamom liqueur--I'm adding this to my pantry (cave) next year! And your cheesecake sounds wonderful.

Oh my goodness, where on earth do you find the time? Liqueur AND a cheesecake? Wow. You are ambitious. But both recipes sound wonderful, and who ever cares about a slightly burnt top of a cheesecake? My mother would say that's her favourite part!

Thanks for sharing both of these scrumptious recipes and for participating in this month's edition of 'Sugar High Fridays'!

Ah, technically... I made the liquour this summer. So no major work this time! The cheesecake, I must admit, didn't turn out as well as I wish it did - see a later post on that subject. Oh well - the people I served it to were happy enough, but it wasn't really to my taste.