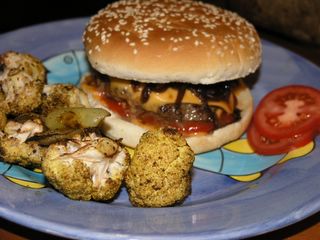 Recently, I’ve been employing several recipes found in other blogs. The other night, I had a craving for a homemade burger, topped with the caramelized onion jam that I found several months ago on The Daily Bread and that I’m planning to make as Christmas gifts for a few select friends. Naturally, I tried the recipe for myself, and it’s yummy indeed. It can be used for many things, I’m sure, but atop a big juicy burger with garlic, raw tomatoes and orange plastic cheese, it was darn good. It created the perfect balance between sweet and savoury, and blended beautifully with the juices of the meat and the tomato. It also has a sharp bite because of the balsamic vinegar. Oh, I love it! I followed the recipe, but made it without the wine. In fact, Donna has later posted that the wine is indeed entirely optional. I used water instead, but I think it can be made without extra liquid at all. It looked pretty runny when I put it into jars (jar, to be exact – a big one.) but it seem to have solidified a little bit since then.

With this, I made cauliflower. I found this recipe a few days ago at FoodNerd! And couldn’t wait to try it! Per made fries to go with his burger, but he ended up eating a lot of cauliflower too. Great recipe – and very versatile. I modified it a little – using a lot less oil (about two tablespoons) and a mixture of white vine vinegar, and balsamic vinegar. I only used a splash of each. Then again, I probably had a bit less cauliflower (just one head) and more onion (two small ones) than the original. Anyway, it was delicious, and I look forward to making this again.
Posted by Anne at 08:50