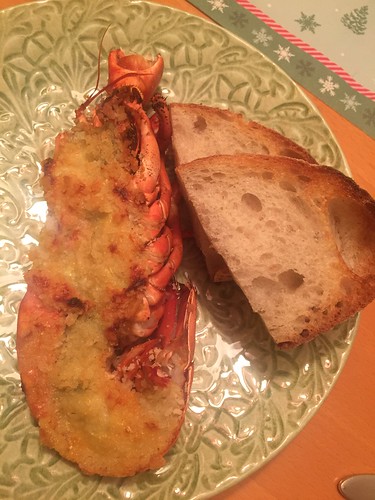 So, I eventually had my first experience with lobster - both cooking and eating it. We were thinking about serving it for a starter for New Year's Eve, but we didn't want to make it then for the very first time, so we got a practise lobster first. Smart move!

As it turns out, we're not huge lobster fans. If you are, then this recipe is great - the flavor combination is right on - but if you're not, well, make something else. I'm not big on shellfish in general actually, I find the entire idea a little off-putting... but sure, it's tasty enough. Anyway. On to the recipe.

It's basically just about making a flavored butter - I took lots of finely zested lemon, grated garlic, and  a heft dose of grated parmesan and stirred into slightly softened butter. I split open the lobster, cleaned it, and slathered it with butter. Finally I sprinkled on a bunch of panko breadcrumbs and stuck the whole thing in the oven at 225°C for about ten minutes. (It could have been there for a little longer actually, you want the topping to crunch up a bit.)

We ate it with some truly awesome sourdough toast. (And I have to say, dipping the bread in the leftover pan juices was the best part.)