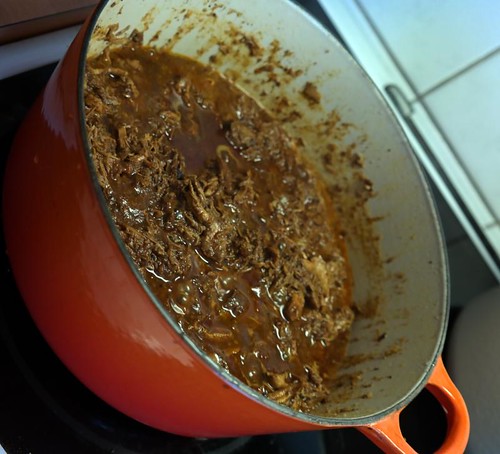 Chicken Mole is not something I'd really imagined cooking. All I know about it is that it's pretty complicated, and everyone has their own favorite way of doing it. However, I wanted a chicken dish for a tex-feast with my friends, and this recipe looked so tempting. It's not very complicated, but it DID cause a lot of clean-up. And be super careful as you'll be mixing hot liquids - my food processor was NOT up to the task, spraying the whole kitchen with hot chicken stock. I'd have to resort to my trusty immersion blender instead.

Heat a little of the oil in a frying pan. Fry the chili peppers for about half a minute on each side, then transfer to a blender. (One that for sure can handle hot liquids!) Pour in the hot chicken stock, and leave to soak for at least 15 minutes. Then blend until smooth.

In a little more oil, fry the onion, garlic, tomatoes, plums and raisins for a few minutes. Add the oregano, thyme and cloves. Add the toasted nuts and seeds. Move the whole thing to a blender, and mix until smooth.

Lastly, fry the chicken on both sides until golden. Use a heavy pot. When it's browned, pour in all your mixed ingredients, and the additional water. Let it simmer until the chicken is tender. When it is, remove to a cutting board, and shred with two forks. Let the sauce reduce until thick, and add the chocolate. Put the chicken back in the sauce, and season with salt.
Posted by Anne at 10:05