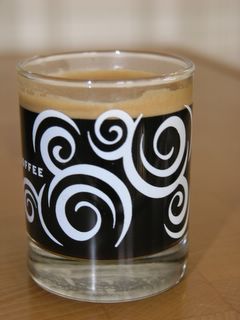 One of my birthday presents was a long-wanted cookbook, which my inlaws sent me. It's "Största Möjliga Njutning" by Henry Bronett, who is not just a cookbook authour, but also a circus director! (And he blogs, in Swedish, here.) The book is filled with stories of his life at the circus, and dotted with great recipes. Everything sounds delicious - and since it's a manageable amount of recipes, I think this might actually be a book I'll try everything from. (Ok, maybe I'll allow one or two outs - the "Swedish Sushi" didn't really appeal to me all that much.)

The first thing I had to try was an espresso with honey. Using honey as a sweetener instead of sugar (or fake sugar, which is my usual choice) - I would have never thought of it. But I have to say it was pretty spectacular. It brought out new nuances in the coffee and brought a silkier, softer feel. Next step will be to try it in a latte - it's definitely worth trying!
Posted by Anne at 15:30

Anne, I like honey in my coffee also, though I usually don't have sugar unless the coffee is too strong. But I have to remind myself, that honey is still sugar & add calories.

Seems strange I know, I felt the same until I tried it. I have a good friend who always sweetens his lattes with honey, something I always thought as so weird. Go figure! And that velveeta is still on my mind, times have been a bit complicated!

Espresso with honey? Now that's something I have to try!

sounds very intriguing. I don´t put sugar in my coffee, I like it bitter, so I guess I´ll never know. But you´ve certainly made me wonder!

That sounds like a really fun read for a cookbook and I really like honey in my coffee.

When I lived in Italy my friends used natural (ie, brown) cane sugar to sweeten coffee. I couldn't figure out why coffee (using the same coffee and process as I used in Italy) in the US didn't taste as good until I spotted the same sugar in my store and brought some home to try. It also adds a very nice mellow sweetness to coffee.