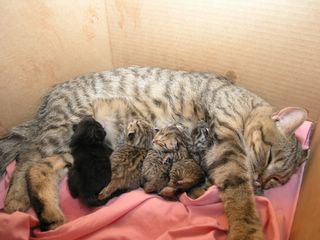 We have kittens! Early, right after midnight, on March 3, Gisele popped out the first little darling. We ended up with five kittens altogether - there was a sixth, too, but sadly he didn't make it. I'll introduce all the kittens individually a little later on, but for now, we have a brown spotted tabby male (who will probably be named Ikaros), two brown spotted tabby females, a silver spotted tabby female, and a black male (whose name is probably going to be Ixion). The naming theme for this litter will most likely be greek mythology, and all letters need to start with an "i". If you have another idea for a good theme on "i", with five names, PLEASE do let me know. :)

Now, I'm off to go see the happy family. Gisele, the mommy, is living with my aunt rather than with me, so this is the first litter I'm not raising personally.

See more cats? Go to Clare and Kiri at Eatstuff!
Posted by Anne at 09:48

Cute! Indiana, Iowa, Illinois, Idaho and.... Iraq? :-) Sorry, a good idea didn't really work all the way (and there are no I-states/districts in Canada or Mexico either...)

Mmm... sooo cute.
How about Ismene (daughter of Oedipus) for one of the girls?

Names that I like with interesting stories behind them:

Iphigenia-'sacrificed' (later rescued by Artemis) by her father Agamemnon so his fleet could sail to Troy.

Ilia- (this more Roman than Greek)

Ixion- Tried to umm...seduce Hera, and ws punished by Zeus by being bound to a wheel which is turned in the air.

I second Ismene and Io!

they are so cute ! it remembers me the birth of my second cat... a magical moment !

What an adorable litter! I am sitting here with Brighton, my cat, and we love the announcement!

Congratulations to the new mommy and you! I hope you cook her some yummy seafood when things calm down a bit!

I have been waiting to see the new little kitty's!!!! Aww so cute.

Can't wait to see them all grow up!

Sorry WCB was so late

Oh those babies are adorable! I love the names. Very original.

Thank you all so much! Nikka, I love that.. we were actually considering naming ALL our kittens after US states and cities, but we changed our mind.. one litter would be fun though. Although, as you noticed, there are only five.. (and I'm *not* naming one of them Iraq!) :)

As for greek names, I think Io and Ismene are excellent. I need one more girl - perhaps Iphigenia! It's so cute!

Jelly, loved both of your theme ideas! Especially Arthurian legend, that's really nice. I did consider Igraine and Isolde, but boy names are much harder there.

And a tiny update by the way, all kittens are doing great, and gaining lots of weight.

Congratulations! They are a beautiful litter of kittens.

IGNIS! It's not a greek god name but it's greek and it means "fire".
I like ur blog and recipes too, when you'll share with us some traditional swedish recipes?
Bye, Scila from Pisa, Tuscany.

Scila - unfortunately, Ignis is the name of a really big chain of funeral homes here :) And as for Swedish recipes, oh, there are tons here! Anything in particular you're looking for? I share whatever I cook. :)

oh my god. they are so cute. and mom looks so happy! congratulations.