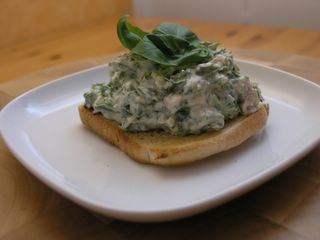 I learned this recipe many years ago, from a girl who worked at the student restaurant Herrgårn in Linköping. She also catered a dinner for a large student union event that we held, and this is when she made these toasts with rocket. Now, let's clear up what rocket is. It's called Ruccola in Sweden, Aragula in some other parts of the world, and Rocket in others. I've learned to love this bitter leaf, and it's very tasty in most salads. It's indispensable in this creamy mix, for sure. As for the cheese - I usually use whatever pre-grated I can find, and that's fine. Last time, I used parmesan - but I actually didn't like it that much. It dominated a bit too much - and let's face it, with strong players like rocket and garlic, you have enough flavor. Still, you want a cheese that can hold its own, so don't go too mild. As for the ham - you can serve it rolled up prettily on top. This time, I chopped it up and mixed it in with the other ingredients. Again, I can't say I really recommend that, the flavor didn't come through as nicely as I had expected. Still, it's an option.

Grate the garlic, and mix with the creme fraiche, salt and pepper. Add the rocket. Add the cheese. Let the mix stand for half an hour or more, to let the flavors blend in. Divide on the pieces of toast, and top with a rolled up slice of cured ham, preferrably rolled around a couple of thin slices of yellow peppers. If you go the other way and chop the ham and mix it with everything else, top with a couple of basil leaves instead.
Posted by Anne at 20:58

Anne,
It took me the longest time to figure out that rocket was arugula. So many names for such a normal looking leaf. Your sandwich looks amazing and I can't wait to try it. Thanks!